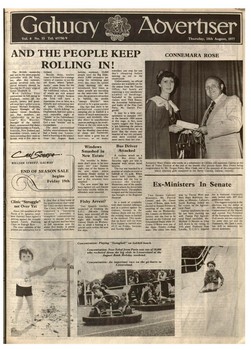 AND THE PEOPLE KEEP ROLLING IN!
The British monarchy may not be the most popular institution with the Irish, but, after this summer, anyone involved with the tourist industry should be blessing the 25 years' reign of Queen Elizabeth I I . With Jubilee Year celebrations in full swing in England, s o m e of t h e crowds, money and good will must have spilled over to Ireland. Michael Anderson, Deputy Manager of the Galway Great Southern, says that numbers are "unbelievably up on last year"; Mrs. Murray, Manager of the Salthill Hotel, commented that there was a huge increase in French, American, New Zealand and Australian visitors, many of them extending their visits to Britain with a few days in Ireland. Besides these, tourists come to Ireland for a strange variety of reasons: to see the old home, where "grandd a d d y " came from; for the sake of either the scenery or the traditional culture, both of which are rich around Galway; or simply because the Irish still have a reputation, true or false, as a friendly and welcoming race of people. One German c o u p l e , h i t c h - h i k i n g to Oughterard, had just spent a very enjoyable night at " S e o d a " in the Taibhdhearc Theatre and were hoping to find a real "session" out in Connemara. T h e more conventional holiday entertainments have had a boom year. Leisureland is bursting at the seams! Over the August Bank holiday weekend, 10,000 people used the Big Slide; about 2,000 swimmers are using the swimming pool every day, since the special cheap morning rate was introduced; four times as many people are travelling on the mini-train than last year; the great new attraction in Salthill, the double "canopy bicycles" have proved to be a great success. The fact that there is no authorised supervised camping site in Salthill is a source of much annoyance to visitors and residents, who also object to unauthorised caravan parking in the resort. Prices in the city seem to be comparatively reasonable, but the Monday close-down of shops and businesses must mean a great loss of r e v e n u e , as s o m a n y

travellers just stop for one day's shopping before moving on out to the countryside. Unfortunately, no official statistics are available yet for the season from the Tourist Office, b u t hotels are reporting a very satisfactory n u m b e r of b o o k i n g s . Included in the summer visitors were Dick Emery, the Australian Ambassador, and leader of the Fine Gael Party, Mr. Garrett Fitz gerald. It may be a little overoptimistic to compare 1977 to the fantastic 1969 season at this stage, in fact, some reports suggest that August is not following the pattern of July, nevertheless we do know that the streets and beaches of our city certainly seem more crowded and more merry than last year.

Windows Smashed in New Estate
WILLIAM STREET, GALWAY T h e troubles in Boher more don't seem to be over quite yet! Last Sunday night, one of the houses in the new estate, where residents finally moved in last week, was broken into and a few windows were smashed. The new estate has not been lighted yet and Gardai had some trouble before the offenders were removed.

Bus Driver Attacked
A viscious attack on a CLE. Bus driver last Saturday night put him in hospital with severe facial injuries. T h e bus was boarded by a number of youths en route to Salthill at 11 p.m. When faced with trouble, the conductor left the bus to contact the Gardai. Meantime, one of the youths tried to attack the driver with a broken bottle. Theatackers escaped and the injured man was brought to the Regional Hospital. As a mark of sympathy with their injured colleague and as a protest against the violence, busmen in the Galway depot will not drive the evening buses to Salthill at the weekend. This means that no buses will run from Eyre Square to Salthill after 10.15 on Friday, Saturday and Sunday nights. Attractive Mary Diskin who works as a telephonist in Clifden will represent Galway at the Rose of Tralee Festival at the end of the month. Our picture shows Miss Diskin being congratulated by Mr. Fergus Foley, Blue Cloak, one of the sponsors of the competition in which nineteen girls competed in the Savoy Cinema, Galway, recently.

Ex-Ministers In Senate
T w o former Cabinet Ministers, Mr. Patrick Cooney and Dr. Conor Cruise O'Brien, were both elected to Seanad Eireann as counting of the votes got under way on Wednesday. Mr. Cooney, ex-Minister for Justice, was the first to be elected on the Cultural and Educational Panel, while Dr. Cruise O'Brien won one of the three Trinity College seats. T h e other two were won by Trevor West and Miss Mary Robinson. An other ex-Minister, Labour's Justin Keating, looked set for victory on the Agricul tural Panel. Galway candidates have so far not been showing too well. Fianna Fail Agricul tural Panel candidate, Mr. Micheal O Morain os lying well down in the voting, in 15th place. Professor Sean Lavelle, U.C.G.'s hopeful for a National University seat, polled only 407 first preference votes. T h e biggest surprise in the elections was the defeat of Mr. Michael Yeats, outgoing Cathaoirlcach of the Seanad and current Vice-President of the European Parliament Full results are not expected for some days yet and ihc Taoiscach, Mr. Jack Lynch, has still to announce his eleven nominees.

Clinic "Struggle" not Over Yet
About 340 members of the Parish of St. Ignatius (mid west Galway) have signed a petition against the recently opened Family Planning Clinic on Raleigh Row. The exact contents of the petition are not known, but it

is clear that at least some of the local residents don't want the Clinic on their doorsteps. T h e Clinic, which last week reported a "booming business", provides a complete contraceptive service to anyone over the age of eighteen and has been in full operation now for about five weeks. A postal service operated before then.

Fishy Arrest?
Two Spanish trawlers, suspected of breaking the E.E.C. 200-mile fishing limit, were arrested off the Aran Islands on Tuesday night and brought into Galway Docks on Wednes day to await a hearing at a special court within the next few days.