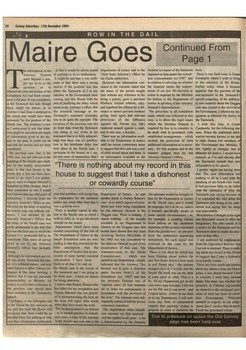 Maire Goes
T
he information of the Attorney General went beyond a sim ple yes or no to the question as to whether the relevant section of the Extradition Act had been consid ered in the past. It was considered, as the Taoiseach has said, though there might be debate as to whether it had been considered to the extent that would have been necessary for the purpose of the Smyth case. The Attorney's view as I understood it was that what ever might be said about the depth of conversation given to the sec tion in the past, it could not be said that the section had not been considered. The previous case, that is the 1992 case, was not relevant to the handling of the Smyth case itself, nor to the totally inexcusable delay in that case except to the extent that it had not been men tioned to me when I was prepar ing my reply to Deputy Mitchell's Question on 25th October. Had it been mentioned to me, I would have known that one vital piece of inforamtion I received from the Attorney General's Office as jus tification for the delay in handling the Smyth case was without sub stance. I was advised, by the Attorney General's Office, that the delay in the Smyth case was partly attributable to the fact that this was the first case in which the Section I've mentioned fell to be considered. That piece of advice given to me by the Attorney General's Office was factually wrong. Although the information provid ed was, as the Taoiseach has stat ed, of a technical nature, and was made known to other Cabinet col leagues at the same meeting, I believe that it was my particular responsibility as Minister for Justice to insist that a reference to the previous case should have been included in the Taoiseach's speech. I apologise to my colleagues and to the House for this omission o a my part but hope the House will recognise that there could be no sensible basis for seeking to con ceal that information deliberately - in fact it would be utterly stupid of anybody to do so deliberately. It might be said that it was delib erate or that there was a wrong motive if the position was that either the Taoiseach or I or any member of the Government were coming into this House with the aim of justifying the delay which arose in the Attorney's office. But the essential message in the Taoiseach's statement yesterday was to do quite the opposite. The existence of the previous case did no more than what the Taoiseach was doing in any event in his statement that is to fully acknowl edge that there was no justifica tion in the inordinate delay that took place in the Smyth case. I apologise to the House, as I say, for this error of ommission, But I

Continued From Page 1
facts. There is one final issue A Ceann Comhairle which I wish to bring to the attention of the House Earlier today when it became apparent that the question of the non-inclusion in the Taoiseach's speech yesterday, of the addition al new material about the Duggan case was crucial to the survival of| the Government, I offered my res ignation as Minister for Justice to the Taoiseach. I took this step, A Ceann Comhairle, for the following rea sons. When the additional infor mation became known to me and to other Fianna Fail members of| the Government last Monday, I felt, rightly or wrongly, that as Minister for Justice, I should have ensured, as I've said already, that the Taoiseach include that new information in his speech. I greatly regret not having done that. The new information had nothing to do as I said with the handling of the Smyth case itself. It had precious little to do either] with the substance of what the Taoiseach was saying because as I've explained the very thing the Taoiseach was doing in his statemeent was saying that the delay was inexcusable. Nevertheless I thought it the right and principled course to offer my resignation. The offer stands. It is a matter for the Taoiseach and the Taoiseach alone to make his deci sion on that offer.

Department of Justice and to the General in respect of the functions Chief State Solicitor's Office by imposed on him under the extradi tion (Amendment) Act 1987 and the Garda authorities. However the information con in relation to advising on whether tained in the warrants stated that the requests meets the require the name of the person sought ments of our law. N o decision or (but without any reference to his action is required by the Minister being a priest), gave a previous for Justice or the Department of Northern Ireland address, only, Justice in advance of the Attorney and signified the offence by a ref General's determination. erence to named persons (without The procedure in all extradition giving their ages) and relevant cases, which was followed in this provisions of the Offences case, is to allow the legal issues Against the Person Act 1861 which the Attorney General is (indecent assault against a male, required by law is to consider to be dealt with in acordance with and in one case, a female). There was no information avail established arrangements - which able to the Department of Justice include the provision o f such until the recent controversy arose additional information as is neces to suggest that this case was a case sary - for that purpose and in the of child sexual abuse and there is manner judged best by the no information available to the Attorney General's Office.

" H R IS N T I G A O T M RC R I T I TEE OH N B U Y E O D N HS H U E T S G E T T A I T K A DS O E T O S O U G S HT A E IH N S O C WRL C U S " R O A DY O R E
trust that members will accept that no explanation for the omission makes any sense other than that it was a genuine error. There is another matter in rela tion to the Smyth case to which I wish to refer, so to get the record straight on the matter. Impressions which have been created concerning of the role of The Department of Justice in the Smyth Extradition case are mis leading in that they proceed on the false assumption that the Department of Justice was in pos session of some further essential information. I have been frank in all that I've said on the Smyth case in the course of this statement and I am going to be frank now - I have no reason for being otherwise. I believe that Deputy Bruton who has called for my resignation and Deputy Mitchell who has persist ed in misrepresenting the facts on the issue will regret their words when they have heard the truth. The factual position is as follows - as is normal practice in extradi tion cases, a copy of the warrants in the Smyth case was sent to the Department of Justice - to nail another plank in Deputy Bruton's case - as to which aspects of extra dition law were being considered by the Attorney General in the Duggan case. There is nothing - I repeat nothing - in the records available in my Department in relation to the Duggan case that would have shown that any issue involving Section 50(2)(bbb) of the 1965 Act was considered by the Attorney General as part of his examination of that case. The communication to the Garda Commissioner - which was passed to my Department - simply indicated that the Attorney "has decided not to give a direction under Section 4 4 A ( 1 ) of the Extradition Act, 1965" and that the Attorney General was o f "opinion (that) all four warrants are in order for endorsement in accordance with the provision of the Acts". The warrants were sub sequently endorsed and the person concerned extradited. The requirement when extradi tion warrants are first received and this applies in all cases - is for a determination by the Attorney

N o pressure would be brought to bear by the Department of Justice on the Smyth case, and it would be improper for it to do so, unless it became specifically aware of some special circumstances - as, for example, a pending release from prison or the imminent departure of the person concerned from the jurisdiction - or pressure from the authorities requesting extradition. N o such signal was I am saddened by implications received in this c a s e by the from the Opposition Benches that) Department of Justice. I set out to mislead. There is noth There is one final lie which has ing about my record in this House been floating about within the to suggest that I take a dishonestj past few hours which I now want or cowardly course. to nail firmly also - the rumour There has been much speculation mongers have it, I'm told, that the about my absence from the House Smyth file itself was on my desk today. I was absent because I had at some point or other. That is a to consider a very very serious lie. All my Department got on the issue. The issue was whether my case were copy warrants. I did not presence in Cabinet represented see the file and it was never - and an obstacle to the continued oper I repeat never - either on my desk ation of what has been an excel or in my Department. I will wel lent Government. Principle come any form of independent seemed to require, in my judge enquiry that anybody wishes to ment, that I remove that obstacle propose in order to establish the I took the principled course.