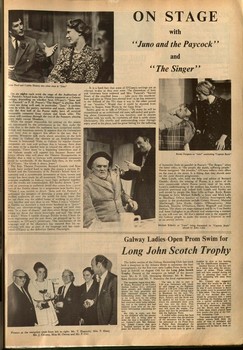 ' Juno and the Paycock
and

On six nights each week the stage of the Auditorium of Patrick's School looks like a Dublin tenement or a Galway ottage, depending o n whether Sean O'Casey's "Juno and be Paycock" or P. H. Pearse's "The Singer" is playing. Both iows are doing well and, in particular, "Juno" is packing iem in while the poetry, narration and music, which com prise the first half of the Pearse night, have all received avourable comment from visitors and locals alike. The cason will continue through the rest of the Summer, playing very night except Mondays. While the people responsible for putting on the season ire encouraged by the attendances so far, they make the joint that in the main the audiences have comprised mainly iritish and American visitors. It appears that the Galwegians lave been slow to support this effort in the way that it leserves. Whenever talk starts about amenities or the lack > them in Galway the absence of an English-speaking f Theatre is bemoaned. Visits to Galway by regular theatre companies are rare and perhaps this is because there does not seem to be a market here to reward the efforts of such companies. There must be a beginning somewhere and if the Galway people will support this Summer Season and future efforts they will show the Theatre Managements in Dublin that a visit to Galway with professional companies could be worthwhile. If the Season fails then, in the words of O'Casey, "the blinds is down, Joxer." The Rep. Theatre Promoters, Bernard Cassidy and Sean Lynch, have worked hard to make this season a success. Br. Robert and the Community of St. Patrick's School have co operated and a considerable investment of time, money and energy has been made by all concerned. The best actors and actresses available in Galway have been gathered together and the results are commendable. Bill Sanfey directs "Juno" with an attention to authentic detail that comes from a great love of the Dublin idiom. In a programme note Sanfey says: "When I was invited to direct "Juno and the Paycock" I welcomed the prospect of directing a great play that has thrilled audiences all over the world for forty years. But for me there was the added bonus of working in an idiom very familiar and very dear to me. When I was a "chiselur" in Dublin we described a back-street layabout as a "Joxer." When our chestnut-strings became tangled we said they were "in a state of chassis" and then when things went very wrong we shook our heads knowingly and said "the blinds is down." When I ramble through Dublin to-day I hear the same expressions and the pub doors are propped up by the successors to O'Casey's prototypes. This timelessness of his language and of his characters has ensured that his ex pressions will stay as part of the language and has estab lished O'Casey as the definitive Dublin Playwright.

It is a hard fact that some of O'Casey's writings are as , relevant to-day as they ever were. The dimensions of hate and bitterness have widened and Mrs. Tancred's "Sacred Heart of the crucified Jesus . . . take away this murderin' hate and give us Thine own eternal love" is no less necessary in the Ireland of the 70's than it was in the other period of our "troubles." Would that it could be shouted from Derry to Saigon, from Watts to the Gaza Strip." Sanfey goes on to talk of 0'Casey--"By many he will be remembered as an embittered old man, self-exiled and pratt ling about Communism. To me, however, and to anyone familiar with his work, he represents all that is noble about Christianity. His charity and understanding come through every word in bis plays, and his great feeling for the suffering;

of humanity finds its parallel in Pearse's "The Singer," when the latter refers to "the people, the dumb, suffering people." Pearse instigated "the troubles," O'Casey reflects their effect on the man in the street. It is fitting that they should meet on the same theatre programme. Sean Lynch, who, with the help and advice of Bernard Cassidy, directs the evening of Pearse, is a native of the very countryside where Pearse wrote most of his work. Lynch's understanding of the medium has resulted in a very sensitive portrayal and indeed both Lynch and Sanfey are well served by people like Sean Lillis as Capt. Boyle, Roisin Duignan as Juno, Michael Kilkelly as Joxer and Mick Lally as MacDara. Others familiar to Galway theatregoers who appear in the productions include Colette Heaney, Mairead MacDonagh, John Forde, Colette O'Shaughnessy, Alan Sherlock, Dorothy O'Gorman, Daithi Wagstaff and Conor Deehan. The shows are stage-managed and lit by Una Dooley and Anme Gallagher in as efficient and unassuming a manner as you will ever see. All that's needed now is the support of the Galway people to make the season a financial as well as an artistic success.
Michael Kilkelly as "Joxer" being threatened by "Captain Boyle" played by John Lillis.

Long John Scotch
The ladies section of the Galway Swimming Club last week held a reception in the Atlanta Hotel to announce the final arrangements for the first-ever open Ladies Prom Swim to be held at Salthill on August 15th for the Long John Scotch Trophy. Present at the reception on behalf of the donors were: Mr. E. P. Gill, Managing Director; Mr. R. Beatty, Sales Director and Mr. T. Hanratty the local representative.
The reception began when Mrs. P. Hosty, President of the Ladies Section Galway S.C, welcomed those present and thanked the donors for their generosity and their continued interest in the forthcoming event. She referred to the work done by the acting Secretary, Miss M. Owens, who had contacted every ladies swimm ing club in the counrty and had supplied them with all the nec essary information concerning the race. Mr. Gill, in reply, said that he was delighted with the amount of work that is being done to make the race a wonderful succ ess. Galway's own 'Mr. Swimm ing,' Jimmy Cranny then gave a detailed account of the clubs plans for Saturday, August 15th. The race is due to start at 3.30 p.m. Swimmers will 'check in' and change at the Eglinton Hotel at 3.00 p.m. They will then proceed to the men's diving tower at Blackrock for the race. The finishing point will be at Palmer's Rock, Salthill, and the finish will be marked by red buoys around which the contestants must swim and then into the shore. First swimmer to reach the shore in this way will claim the trophy. The prizes will then be presented out side the Eglinton Hotel. A walkie-talkie system has been arranged in order that the position of the swimmers will be sent to the announcer on the Prom from a Patrol Boat throughout the race. It was also decided that the swimmers would each be given a

Trophy
number to stick to her bathing cap for identification purposes. Another feature of the day will be a canoe race after the presen tation of prizes. Those taking part will have assisted during the race in assuring that none of those swimming will stray from the course. Mr. Cranny also suggested that since this would be the first year of the swim that it would be nice if each swimmer to finish the course could be presented with a little token. This was agreed on, and it was decided that each would be presented with a towel on reaching the finishing post and also a special certificate will be presented to each at a reception to be held afterwards. Mr. Gill and Mr. Beatty were then given a little token which pleased them very much--the crest of the Gal way Swimming Club. This event should prove a mar vellous success both from the point of view of swimmers and spectators--let us hope that 'he elements will be kind to them on that day.