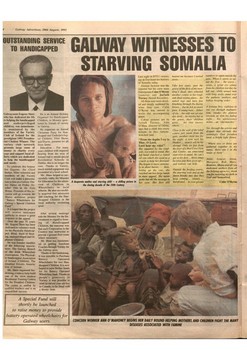 G L A WITNESSES TO AW Y S A VN SOMALIA TRIG
Last night on RTE1 viewers say at first hand the horrors of Somalia today. Alastair Jackson was the reporter but his crew were Galwaymen Colm O'Byrne (camera) and J a r l a t h Tierney (Sound Recordist). All three men were shock ed and deeply saddened by what they saw. Colm O'Byrne was moved to write the accompaning poem. Colour pictures are by Jarlath Tierney, John O'Shea, director of GOAL says that a child dies every minute in this faminewracked land. haunts me because I turned away. Fifty feet away, past the grave of the first of the mor ning's dead, they wheeled another corpse to his road side final resting place... his naked legs and bare feet brushing through the thorny briars... but he felt no more pain. A young man... father of six... his wife not yet one day dead... he rejoins her in the grave, their children gone... no one knows where. Close to the wall of the relief centre just yards from the gate, another child lies for the night, a torn sack his blanket.... soon it will be his shroud. Only six feet from the door of a Red Cross First Aid Centre, an emaciated man tries to stand. He can't get to his feet... three times he tries and then gives up... and nobody can help. Outside the feeding centre, the starving wait and as the dawn breaks into day they keep coming... silently.... barefooted... in even greater numbers to squat outside the gate. When it opens to ad mit the first... the worst... cases, a great cry comes from the children lest they be left out, while armed men with long sticks stand over the pathetic mothers and babies keeping order. A teenage boy, sightless in one eye through malnutri tion, sneaks shy glances towards us with his fading sight... his adolescence stolen. ..an' 'old-man-boy''. Yet, through the sorrow and despair that shrouds this seemingly God forsaken land, a bright light shines. "Where two or three are gathered together in my name, there am I in the midst of them''. Anne, Louise, Anita, Margaret, Rob, Mary, Beatrice, Maria and all you dedicated workers from all the helping agencies, thank you for restoring my faith in God and humankind. Colm O'Byrne

Galwayman Eugene Shaw who has dedicated his life to helping the handicapped and underprivileged children, was unanimous ly n o m i n a t e d by t h e members of the Variety Club of Ireland for the prestigious 1991 Presiden tial Citation Winner. The variety club network presents large sums of money to charity every year and support local ef forts which are dedicated to help the handicapped and needy.

To celebrate this honour for Eugene, the Chief Barker, Mike Adamson and members of the Variety Club will make a presenta tion to him at a Galway Din ner Dance on Friday Oc tober 16th at the Eyre House. Proceeds of this oc casion will go towards Mr Shaws ambitious project "Battery Wheelchairs for Galway's Special Children Fund"". It is hoped that the project will receive maximum After several meetings publicity to ensure a good with the Minister for the En response to the appeal. vironment in regard to hous Over the past 35 years ing of Handicapped Mr. Eugene Shaw has been Children, the outcome was dedicated to voluntary work that each Corporation in the for the Physically Handicap Country was instructed to ped. Blind, Hard of Hear provide a ground floor room ing, underprivileged and Or where necessary. phaned Children. Mr. Shaw was instrumen He was founder member tal in getting Sunshine of the following associa Coaches through Variety for tions: The Galway Branch the Galway area. of the Irish Wheelchair Thanks to his fund raising, Associations. The Physical it was possible to Purchase ly handicapped Association Battery Operated of Ireland (Children). The Wheelchairs for two Han Disabled Drivers Associa dicapped Children. It is now tion of Ireland.. hoped to raise further funds Mr. Shaw organised funfor his Battery Operated draising events to help build Wheelchair fund. Thanks to one of the most modern p e o p l e ' s generosity to Residential Training Centres Variety it was possible to for the Disabled Children. send an eleven year old boy The centre is staffed by to Canada, to be fitted with qualifed teachers and is an a Bionk Arm. unqualified success.

He is an Annual Holiday Organiser for Handicapped Children, to Mosney spon sored by friends of variety in Galway. He organises an Annual Christmas Party for Handicaped and Underprivileg ed Children, Film Shows "From the depths I cry to and Discos, presents for all Thee, O Lord, from Santa. Lord hear my voice" Education - For many She squatted by the road years children with impaired side, too weak to stand. Her hearing from the west of left hand clutched a rusted Ireland had to attend special oil can which she used as a Residential S c h o o l s in crutch to help her forward. Dublin, this is no longer the She began to move anxious case. Thanks to Variety, ly in short bursts then, much needed equipment was letting go the can, she presented to a local school. reached out two large hands Mr. Shaw helped to suc in mute appeal. She never cessfully lobby the Minister spoke but oh! the message in for Education for the admis A desperate mother and starving child -- a chilling picture in eyes. Her face still her sion of Children in the closing decade of the 20th Century Wheelchairs to local schools. He also successful ly acquired free admission and coaching for the Han dicapped Children in the local authority swimming pool.