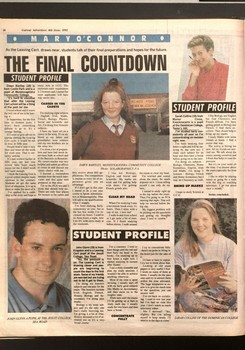 As the Leaving Cert, draws near, students talk of their final preparations and hopes for the future.

T E FN L C U T O N H I A O ND W
STUDENT PROFILE
Dawn Bartley (18) is from Castle Park and is a pupil at Moneenageisha Community College. "It's hard to visualise that after the Leaving Cert school will be a thing of the past for me.
I loved school and it scares the hell out of me to be leav ing it. In September, for the first time in thirteen years, I w o n ' t have something definite to go to. It's a strange feeling. If I were to give advice to anyone starting the Leaving Cert cycle, it would be not to doss in fifth year. People tend to take it easy then and leave all the work for sixth year. That is cer tainly unwise. If I had worked harder in fifth year, my last year would have been much easier for me. I didn't work half hard enough. I think the Leaving Cert is a good system despite many opinions to the contrary. Students all get the same level of education. It is up to them to make the most of it. I've applied for a cadetship in the army and hope to study Arts at UCG. The minimum entry requirement is 2 honours and 2 passes but most applicants will have way above this.

CAREER I N THE CADETS
I'm studying eight subjects - English, Irish, Maths, French, Biology, Physics, Social and Scientific and Art. I'm doing four Honours subjects. I have my heart set on a career in the army. It's in my blood as my father and grandfather were soldiers and my two brothers are in the army too. I've done a lot of prepara tion and have had mock in terviews both at school and at the Barracks in Renmore. My careers teacher was very helpful and asked an officer to come in and discuss my career choice with me. I learned a tremendous amount from the mock inter views and feel quite well prepared in that area. I'm in the FCA too and I think that should help me. There are only four places for women in the cadets and

STUDENT PROFILE
I like Biology and English Sarah Collins (18) from Manor . Close, but find Chemistry and Knocknacarra is a pupil French dificult. I've been at the Dominican College, getting grinds in Biology and French. I find them ex Taylor's Hill. I've studied fairly con cellent. They should help to sistently all year so I'm bring up my marks. I study Maths with some concentrating on revision friends at home. I find it right now. I've been studying four hours a night and will be stu dying by day now too. I study each subject for an hour and then have a break before going on to the next. I'm doing six subjects Biology, Chemistry, Home Economics, English, Irish and Maths. I'm doing 3 honours - Biology, French and Home Economics but I may do Chemistry as well. easier that way. The worry is hitting me now. All my friends are wor ried too. We talk about the exams among ourselves and I think that helps to ease the pressure. But it's on your mind all the time. I've dreamt about the exam especially the Irish paper. I like to relax by playing tennis or going for a walk with the dcg or watching television. I go out about once a month." Series concluded.

they receive about 800 ap I like A r t , Biology, plications. The competition English and Social and is intense so every bit of ex Scientific. My maths are p e r i e n c e gives you an weak and I'm getting help advantage. with them. I'm getting If I don't get in this year French grinds also. I intend to do a one year course in Sports Administra tion at Moneenageisha. That CLEAR M Y H E A D will add to my qualifications when I reapply. When I'm studying I take I've been studying fairly a ten minute break every V/i consistently all year, but in hours. Then I relax with a the last few weeks I've in cup of tea. I love tea! creased my hours. I used to I walk to and from school do three hours a night, now so I get quite a bit of exer I do 4 /z with extra study at cise. If I finish studying the weekends. before eleven, I walk around
l

the estate to clear my head. I'm worried and scared about the exam. So much depends on it. I keep telling myself I can only do my best, I intend to study right up to the day before the exam. Then I'm going to an FCA meeting that night. That will help me unwind before the big day. My biggest problem will be picking out the questions and getting my thoughts clear. I tend to ramble."

S T U D E N T
John Glynn (18) is from Kingston and is a Leaving Cert pupil at the Jesuit College, Sea Road. "Yes, the pressure is on. The Leaving Cert is drawing closer and peo ple are beginning to count the days to the first exam. Some of my friends are worried but are trying not to let it get to them.
I'm doing six honours subjects and one pass for the exam. The honours include Irish. English, French, History, Biology and Ac countancy. I'm doing pass Maths. Biology is my weak sub ject and it's the only one that's really worrying me. I'm giving it a lot of time. History demands a lot of at COLLEGE. tention too as it's a very broad course.

JOHN GLYNN A PUPIL AT THE JESUIT SEA ROAD

I'm a crammer. I tend to I try to concentrate fully leave things until the end and - there's no point in filling in then bury my head in the the hours just for the sake of books. I'm studying up to it. four hours a night now. I I'd hate to have to repeat. started studying in earnest I try not to think about that. after Easter. Looking at old exam I use a study timetable and papers is very useful I find. plan my study sessions. I I work on some of them at wouldn't be able to achieve home. I usually do the pass anything otherwise. ones and try to answer them Most of my time is spent within the time allocated. revising. I usually start off The huge temptation at ex with my fairly good subjects ams is to give too much time like Maths or Accountancy to the questions you can and then move on to the answer well. tougher ones. I've cut back on socialis From now until the exams ing. I used to row last year I'll be getting up at 9am to but I've had no time this study each day. I usually year. I don't watch as much study for two hours and then television either. have a break. Am I nervous? "Yes, slightly. But I'm telling CONCENTRATE myself to keep steady. I'll FULLY need to in the days to come."