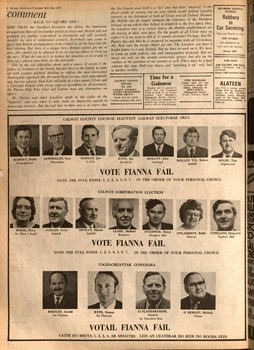 comment
BACK 1 0 SQUARE O N E ? NOW THAT the Northern Executive has fallen, the immediate arrangement then will be another period of direct rule. Britain will not probably try another experiment in devolution and will certainly consider the idea of withdrawal seriously. Everybody now seems to agree that British disengagement from Ireland is, in the long run, the best solution. But there is a danger here. Britain cannot get out at once. She should not be allowed to do so, leaving others to clean up the mess. What she can do is to declare her intention to do so and to draw up a phased time-table for the inevitable. (hie of the real difficulties about such a course of action is the failure of Irishmen in the North, but also here in the South, to come up with creative political thinking to replace the now discredited Sunningdale approach. Mr. Desmond Boal, for one, tried some months ago, but was ignored. Sinn Fein still talks of a nine-county Ulster and a federated Ireland with strong regional assemblies in all provinces. Do Fianna Fail, Fine Gael and Labour have any alternatives on offer ? Dr. Paisley and other Loyalists speak of the rights of the "majority" and can, when it suits, make an impressive appeal to democratic instincts. But the real flaw in their case is of course that

the Six County area itself is a "fix" and that their "majority" is the direct result of carving out an area which would protect Loyalist interests to the detriment of both all Ulster and all Ireland. Because the British can no longer stomach the injustices of the Northern Ireland set-up which they helped to establish in the first place, they, the Loyalists and to a certain degree the Dublin establishment are all stewing in their own juice. Do the people of all Ulster have no rights? Is it too early to talk of 32 county elections} Perhaps. But Dr. Paisley has said that he is prepared to negotiate with all Ulstermen. Mr. Boal says the troops should get out. The Loyalists can have a bright future in a new Ireland. But we have to work on it. We have to come up with realistic, fair and immaginative proposals that are based not only on the normal democratic process but also on the realities of the partition of our country as well. There must be a final solution this time. Half-way houses and "patching it up" only lead to further trouble.

THE ORDER OF YOUR PERSONAL CHOICE.