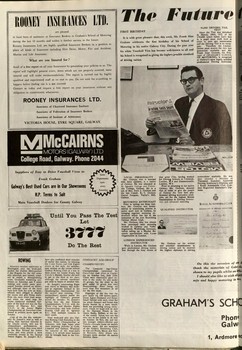 mm mum LTD.
are pleased to have been of assistance as Insurance Brokers to Graham's School of Motoring during the last 12 months and wishes it further success in the future. Rooney Insurances Ltd. are highly qualified Insurance Brokers in a position to place all kinds of Insurance including Hire Drive, Motor, Fire and Accident, Marine and Life Assurance.

The
FIRST BIRTHDAY Graham celebrates the first birthday of his of driving tuition.
J

Future
School of 91,000 DRIVERS FAIL TEST Since the Test was introducd in March, 1964, 54% of the 170,000 tested failed. Let's face it, a pupil must work hard in order to pass any examination and the Driving Test is no excep tion. Therefore the LearnerDriver must receive the very best instruction available and Mr. Frank Alan Graham, the Prin cipal of GRAHAM'S SCHOOL O F M O T O R I N G , is recognised as Galway's most highly qualified professional Driving Instructor.

It is with great pleasure that, this week, Mr. Frank Alan

Motoring in his native Galway City. During the past year his white Vauxhall Viva has become well-known to all and his School is recognised as giving the HIGHEST possible standard

What are you Insured for ?
Avail of a free report on all your Insurances by presenting your policies to us. The report will highlight present cover, items which are not properly covered, sums insured and will make recommendations. The report is carried out by highly qualified and experienced staff at no cost to you. Do not wait for something to happen before finding out it is not covered. Contact us today and request a free report on your insurances without any obligation or commitment whatsoever.

MMcCAIRNS
I M B M

to
LOCAL PERSONALITY Mr. Graham who is married with three children, is a native of Galway. He was educated at St. Ignatius College and Univer sity College, Galway. He is a son of Mrs. Irene J. Graham and the late Comdt. E ^ J . Graham Dental Surgeon, Taylor's Hill, Galway. MOTORING ENTHUSIAST Prior to setting out from Gal way, Mr. Graham was instru mental in stimulating interest in motor sport here in Galway, by bringing together motoring en thusiasts which has led to the formation of the now flourishing Galway Motor Club. Mr. Graham, who has always been associated with motoring worked in Galway and Volkswagenwerk, Wolfsburg, Germany, before taking up a Market Re search appointment with Lucas Organisation in London. -- L O N D O N EXPERIENCED INSTRUCTOR While in London, Mr. Graham gave professional driving instrution through the busy streets of that great City, having worked for Driving Schools in Chiswick, London, W.4 and Hammersmith, London, W.6. Prior to returning to his native Galway, Mr. Graham, ensured that in order to give the people of Galway the very best pro fessional driving instruction avail able, sat for the highest British Examinations in Driving Instruc tion and advanced motoring. instructions available. He was thus awarded a Ministry of Transport (London) Approved Driving Instructor's Diploma and a Royal Automobile Club (Lon don) Registered Instructor's Dip loma.

Graham
ARE IN OUR SHOWROOMS

Until You Pass The Test Let
1

w
CONNACHT AGE-GROUP CHAMPIONSHIPS The Connacht Age-Group Championships (sponsored by Coca-Cola) took place at Castlerea on Sunday last, July 12th. There were reasonably good en tries in the under 10, and under 14 groups, but the entry in the girls under 16 group was very disappointing; there being no more than five swimmers in all for the five races. Highlight of the day was the girls under 14, 100 metres crawl,' where Agnes Desmond and Susan Small battled with each other for the whole distance and Susan was finally beaten by a mere touch. Both are promising young swim-' mers, whom we hope will do weir at the National Finals in the Grove Baths, Belfast, at the end of the month. Susan was not the only one in her family to do well on Sunday. In fact, she and her two younger sisters--Muriel and Valerie--brought home six medals between them. All are members of the Galway Swimming Club, as also are Paula, Moya and Nessa Kennedy, three sisters who brought home another six medals between them.
1 1

Do The Rest
have also confirmed their victories of earlier this season, by winning the Cadet Eights and Colt Eights events in fine style. An unfortu nate mishap on the course robbed Galway Rowing Club of a win in their event for Junior Fours, but U.C.G.'s Maiden Sculler did well to get to the final in his class, although the adverse conditions put paid to hopes of another win. St. Joseph's outstanding Eight now travel to Molsley this week end to represent Ireland in the Quadrangular International for the second year running. This extraordinary success marks the highlight of Galway's greatest season for decades: St. Joseph's having won the two Schools Championships; U.C.G. with the Wylie Cup and Maiden Eights Championship; and both Galway Rowing Club and St. Ignatius R.C. with multiple victories to their credit. Next week-end also sees Gal way Rowing Club featuring in the Junior Fours Championship at Askeaton, with high hopes after their inspiring victories at Cork, Limerick and Galway. Whatever the outcome of the week-end's events, it is certain more honours will be brought back to the Corribside.

Mr. Graham sat for written and practical examinations in driving tuition and he received the highest diplomas in driving

Atrocious weather conditions at Blessington over the week-end, spoiled the Dublin Metropolitan 2 day Regatta for the 160 crews who attended, and overall, resul ted in rather a dissappointing event. Gradually worsening con ditions on Saturday saw 9 crews sinking and sculls races post poned. Sunday proved no kinder, and although most of the races were held back for over an hour, officials were obliged to shorten the course and give flying starts. Even yet, more crews were swam ped when the wind over the course continued unabated. Sur prise of the week-end was the fine victory of Neptune B.C. over U.C.D. in the Senior Eights Championship on Saturday--con firmed in positive terms again on Sunday. Club of the day was undoubt edly St. Joseph's, who as well as taking their expected victories in the schools events, also put in extraordinary performances at senior level, when they came third in the Blue Riband for Senior Fours, and were placed a most creditable second in the Second Senior Eights. St. Joseph's R.C.

On this the occasion of OIL | thank the motorists of Galm th, shown to my pupils whilst on Ithn I should also like to wish all}pil safe and happy motoring in irt