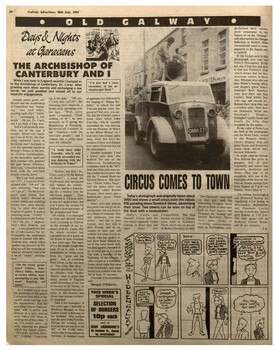 G A L W A Y
performed their variety show sometimes in the Square or on the "Swamp" and often behind the Hangar Ballroom in Salthill. Tofts Amusements used to come regularly to the Square and to Salthill. In the background of this photograph you can see Porter's Newsagency. To the left was Clohertys and next to that was Flaherty's shop which always had the best American comics in those days. Whelans were next and then Power's betting office and Keane's guest house. Jenning's Pork Butchers were next door, and then Lydon's shop where they sold rugs and tweeds etc. Behind their shop they had a woollen mills. Next door on Dominick Street was Kavanagh's Drapery, Gallagher's public house and finally the little shop occupied by the nailer. To the right of Porter's as we look at the photograph was the Hotel Enda, owned by the Hegarty family, Owen's Drapery shop and guest house and Donovan's sweet shop which later became Mitchells. In recent years the Galway Arts Festival has given us parades full of gret originality and colour and spectacle, devilment and music. This year is no exception, with one of the highlights of the festival, the Macnas Parade starting from Eyre Square at 3 p.m. on Sunday. Don't miss it! Today's photograph was originally taken about "The Chemicals" were built 1950 and shows a small circus (with the initials on that site, and the KB) parading down Dominick Street, advertising travelling troupes were their show. Two clowns can be seen on top of forced to think of other sites such as Eyre Square, the the float with a loudspeaker. Duffy's Circus and Chipperfields. The first Fairgreen, the "Swamp" and Fossett's Circus were the known circuses in Galway latterly Ballybrit. There two which regularly visited were held in Lynskey's were other kinds of Galway in those days and Field, which was on the site travelling entertainments later there was of Burke's Distillery. In 1912, such as McFaddens, who The Galway Archeological and Historical Society are organising a car outing to Roscommon, Ballintubber and Dunmore Castles, leaving Courthouse Square next Sunday at 2.30 p.m. The tour guide will be Professor Etienne Rynne, and all are welcome. --T.K.

THE ARCHBISHOP OF CANTERBURY A N D I
While I was over in England recently I bumped in to the Archbishop of Canterbury, Dr. Carey. After greeting each other warmly and exchanging a few words, we said goodbye and moved off to our separate engagements. ing at the gate". "Oh yes, Sounds pretty good, eh? it's very nice, isn't it?", the Myself and the Archbishop charming cleric observed, a of Canterbury just "bump broad smile spreading over i n g " into each other, his face. "Well, sorry greeting each other "warm again", 1 repeated. "Think ly", "exchanging a few nothing of it!", he pro words". Oh yes. Dr. Carey nounced, as if giving the and I go back a long way. Benediction at Evensong. And it's all perfectly true. He moved off, 1 assume, to Only not in the way it the "function...with the sounds. About two weeks television people", and I ago I was in Wells, the char slipped into a coffee shop ming cathedral town in near the cathedral. Somerset, and I had gone to visit the splendid medieval " A week later John Bishop's Palace in the cen Travolta, who'd only tre of town. Unfortunately, recently serenaded me, as the incredibly aged and was dancing with the bent retainer who guarded Princess of Wales!" the gate house informed, there was " a function being held, with the television "Excuse, but didn't Dr. people coming down". Carey used to be the Bishop "But I can look around, of Wells?", I asked the can't I ? " , I inquired of this bright-eyed and spectacled stooped relic. "Oh yes", he lady behind the counter. said, wheezing, "but you "Oh yes, and he's down to can't go in". On the lovely day for a funtion with the green quad within, four television people". That elderly ladies, dressed in confirmed it. I'd been pret cricket whites and wielding ty sure as I spoke to him, but cricket bats, were attemp now I knew for certain I'd ting to play this most just had a close encounter of English of games. It made a the archepiscopal kind. charming scene. "Lovely", Of course, I've managed I commented to old Yorick. to dine out several times "Eh? Oh yes, I suppose. since returning to Galway That's Mrs. Drakins, you on the strength of my in see". I was grateful for this timacy with Dr. Carey. But bit of information, but un the whole incident has fortunately the gatekeeper reminded me of a game an failed to explain who Mrs. old friend of mine invented Drakins was, which rather a few years ago. The basis spoiled my pleasure in fin of it is the simple insight that ding myself the recipient of each of us is only a few what he obviously took to be handshakes or rooms away a bit of "inside" informa from the "great and the tion. good". Just as comedian Peter Cook, in the old days "On the lovely green of "Not Only But Also", quad within, four when he did those very fun elderly ladies, dressed ny sketches with Dudley in cricket whites, were Moore, used to argue that attempting to play this every person in England most English of stood somewhere in the line of descent to the throne, so As I walked away from my friend argued that prox the gatehouse of the palace imity to the famous was I turned to took back at the closer than anyone ordinari superb stone carving over ly imagined. Take a few examples. A the eMranceway. And the next thing 1 knew I had col few years ago I attended a lided with a tallish man Medieval Banquet in Dun dressed in a grey clerical Guaire Castle in Kinvara on shin, with a little while bit my birthday. Alio present was the actor John Travolta. s a y . I'm awfully sorry", he During the evening some said, his glasses kind person passed on to the which had slipped slightly. MC of the Castle enter tamers that it was indeed my "Not at all. my fault entire ly!". 1 replied, "1 was kwk- birthday. A drunken round " I ' d just had a close encounter of the ar chepiscopal k i n d . " of applause was followed by the singing of "Happy Bir thday" to which the said Travolta lent his voice. Im pressive? Not very, you say. Ah, but the clincher came a week later when John Travolta, who'd recently serenaded me, was dancing with the Princess of Wales in the White House! So I was only one sweaty palm away from this fairy-like creature I have worshipped ever since I first saw her (in the newspaper). Another example. I had a friend who once who worked for one of the American broadcasting companies back in the '60's. And one of his jobs was cue ing a faded movie actor who did the 3 minute blurb for General Electric. The show was "Death Valley Days" and the faded actor was somebody called Ronald Reagan. Once more, just a handskake away from destiny! Once you start playing this game you can go on for a long time. All you have to do is think of someone - film star, politician, pop star, writer - and talk to your friends, who then talk to their friends, and so on. Sooner or later you will without fail come across so meone who has spoken to, had their hand shaken by, sat in the same room with, brushed against, bumped in to, or even got on a crossed line with, a memner of the fraternity of the famous. I offer myself as a candidate: I once stood eight feet away from Gorbachev and main tained eye contact with him for at least 35 seconds. I wonder if he remembers me?