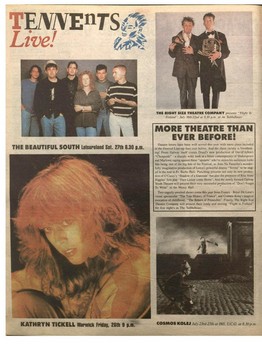 MORE THEATRE THAN EVER BEFORE!
THE BEAUTIFUL SOUTH Leisureland Sat. 27th 8.30 p.m.
Theatre lovers have been well served this year with more plays included in the Festival Line-up than ever before. And the sheer variety is breathtak ing! From Galway itself comes Druid's new production of David Allen's "Cheapside" - a sharply witty look at a bitter contemporary of Shakespeare and Marlowe raging against these "upstarts" who've stolen his audiences looks like being one of the big hits of the Festival, as does Na Fanaithe's wonder fully imaginative production of Lorca's powerful drama "Yerma" to be stag ed in the tent in Fr. Burke Park. Punchbag presents not only its new produc tion of O'Casey's "Shadow of a Gunman" but also the premiere of Rita Anne Higgins' first play "Face Licker come Home". And the newly formed Galway Youth Theatre will present their very successful production of "Don't Forget To Write" in the Mercy Hall. Two eagerly-awaited shows come this year from France - Royal De Luxe's visual spectacular "The True History of France", and Cosmos Kolaj's magical evocation of childhood, "The Return of Pinnochio". Finally, The Right Size Theatre Company will present their funny and moving "Flight to Finland" for five night's in The Taibhdhearc.