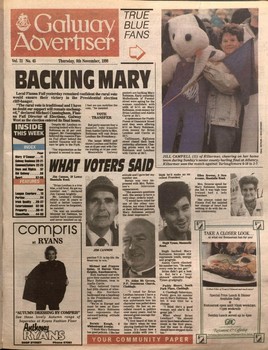 Local Fianna Fail yesterday remained confident the rural vote would ensure their victory in the Presidential election cliff-hanger. "The rural vote is traditional and I have I feel we can mobilise the no doubt our support will remain unchang vote, "he insisted. ed," declared Michael Cunningham, Fian VOTE na Fail Director of Elections, Galway TRANSFER West as the election entered its final hours.

Despite Mr. Lenihan re maining locked with Mary Robinson on 43 per cent support, Mr. Cunningham believed the massive Fian na Fail effort behind the sacked Tanaiste will en sure he gets to the Park. "Our organisation on the ground is second to none.

But party sources fear a massive vote transfer from Austin Currie to Mrs. Robinson will cost Brian Lenihan the Presidency. The latest MRBI poll shows Lenihan and Robin son at 43 per cent with Cur rie trailing at 14 per cent. Meanwhile Galway

WHAT VOTERS SAID
Jim Cannon, 19 Lower Shantalla Road. "Brian Lenihan is a true blue, a full bred. He got my number one." declared Jim Cannon brightly. Mr. Lenihan's tireless efforts over 35 years to build a better country should never be forgotten, he insisted. "He was an excellent Minister for Defence, he worked hard consistently and never insulted an op.IS ...24 28-27 32-38 38-41 44~58

JILL CAMPELL (11) of Kiltormer, cheering on her home team during Sunday's senior county hurling final at Athenry. Kiltormer won the match against Turloughmore 0-18 to 2-7.
think he'd make an ex cellent President." Ellen Browne, 8 New Avenue, Shantalla Road. Mrs. Browne opted for Mary Robinson because she felt it was high time Ireland had a lady President. She always voted for Fianna Fail but insisted her change of heart had nothing to do with the re cent controversy.

attitude and I gave her my number one. Bernie was very im pressed with Mrs. Robin son's television appearances. "She answers questions well. She seems to have a very clear, orderly mind. "I would have voted for one of the other can didates, but when I looked at their different policies, Mary Robinson seemed the most impressive."

TAKE A CLOSER LOOK...
.. .at what our Restaurant has for you! Hugh Tynan,! Road. JIM CANNON position T.D. in his life. He deserves to win." Michael and Frances Quinn, 14 Barren View Heights, Knocknacarra. Both husband and wife gave their number ones to Mary Robinson, twos to Austin Currie. They believed Currie had little chance of winn ing. His Northern backround was a handicap in the Presidential race, they agreed. "We're in Europe and must be seen as Euro peans. Mary Robinson best represents that outward-looking attitude we need." Bernie Keogh, 9 Whitestrand Avenue. "I think Mary Robinson has good policies. I like her Hugh backed Mary Robinson because she represents youth, energy and progress. Austin Currie clinched his number two. "He needs every vote he can get!" Brian didn't get a look in. But he's a "sexy shmuck" admitted Hugh Tynan grudgingly. Paddy Moore, South Park Place, Claddagh. A Claddagh fisherman, Paddy gave his number one to Mary Robinson. He felt it was time for a change. "I think she's a good woman and she'd do a great job." What about Brian Lenihan? "He should never have been allowed to stand in the first place. And the man in charge should have stepped down too."
Gritted Fillet of Tram 61 Almond aid muck more!

F T . Aidan Mc Govern, P.P. Dominican Church, Claddagh. "I voted for Brian Lenihan because I have a lot of respect for him. It was unfortunate how his character was pulled down recently. He has an ex cellent record in politics over many years. And he snowed great courage dur ing his illness. "I first heard of him in the 1950's when he was playing football for Bohe mians. It's funny how a name sticks with you. I