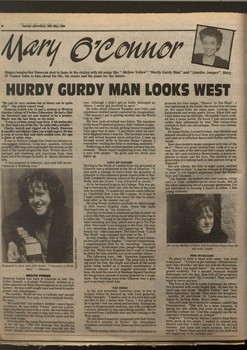 Singer/songwriter Donovan shot to fame in the sixties with hit songs like " Mellow Yellow" "Hurdy Gurdy Man" O' Connor talks to him about his life, his music and his plans for the future.

He wrote Mellow Yellow and Sunshine Superman for

his wife Linda. FINE MUSICIANS He plans to form a band with some "fine Irish musicians". "I'd love to get Anthony (Thistlewaite) and Colin (Fairley) but they are with the Waterboys. "Why don't you poach them?" the Advertiser sug gested wickedly. For a second, Donovan drooled deliriously over the idea, then with all the propriety he could muster said "No, I couldn't. They wouldn't want to leave anyway." The love of his life is Linda Lawrence, an attrac tive brunette with waist-length hair. He met her 25 years ago and wrote "Mwllow Yellow" and "Sun shine Superman" for her. They have two daughters - Astrella (19) and Oriole (18). Linda also has a son, Julian by Rolling Stone, Brian Jones. Don and Linda have formed a company called Clan Presentations. "This will be a base company to spring my new album and work on my daughter, Astrella's album too. I feel the company can be en couraged tremendously in Ireland. Regrets? "During my thirties I used to think there were parts of my music I wished to expand into theatre and film. I didn't pursue it for the obvious reasons - fast fame and world acclaim. But I did regret it. Those ideas are still there on the shelf and are beginning to be realised now."

Exposed to jazz and folk music "I became a think Man" -- Donovan Donovan Leitch was born in Glascow in 1947. His father Donald, a Scottish Protestant, worked as a lathe operator on Rolls Royce engines at an aircraft factory. He was a self-taught man and loved to recite poems and monologues. His mother, Winifred was a Catholic and second generation Irish. In a way, it was a musical family, he says. "My uncle Bill - my father's brother - was a figure of renown. He was called "Postie" and was a strik ingly handsome man with a tache. He reminded me of Billy Connolly. He used to sing and wear a kilt. I'll always remember the lilting Scottish tunes and the sad Irish songs." 18 months the young Donovan contracted polio in his left leg. "The war damage was producing disease in Glascow - sewage was pouring into the street, the gas and electricity were destroyed by the