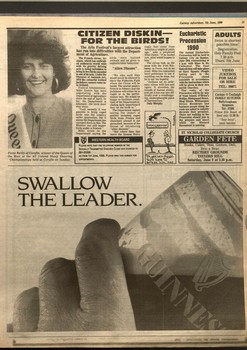 CITIZEN DISKIN
The Arts Festival's largest attraction has run into difficulties with the Depart ment of Agriculture.
The French circus, Archaos, which has enthrall ed audiences world wide with its gravity defying acts is being forbidden to bring in two birds essential to one of its acts. Under the Diseases of Animals Act, 1976 the colourful trained jackdaws cannot come in to Ireland. Festival Administrator, Mike Diskin has been negotiating with the Department of Agriculture since the end of April. So far, the Department is adamant - the birds must stay away. "Until recently it was possible to bring caged birds into the country under quarantine, but it seems the Department has clamped down on this. The Minister can still import birds under a licence." Mike wrote to the Department saying the birds were trained animals and not given to unpredictable behaviour. eagle that came from America a couple of years ago," asks a perplexed Mike Diskin. "If he landed now, what would happen to him." The circus took up the issue with the Irish Em bassy in Paris, but to no avail. Mike has contacted local politicians to see if anything can be done, but he is not too hopeful. "Archaos not an ordi nary circus with lion and tigers. It stretches the bounds of human ability, and yet it has run into dif ficulty over a mindboggling, undecipherable piece of bureaucracy." Judy Murphy

Eucharistic Procession 1990
The Annual Eucharistic Procession will be held in Galway City on Sunday, June 10th commencing at 4 p.m. with Mass in the Cathedral. The final Benediction will take place at Eyre Square. People taking part in the Procession shoud assemble in accordance with the instructions which will be given in their own parish churches. The route of the Procession will be by way of Nuns Island, O'Brien's Bridge, Mainguard Street, Shop Street, Williamgate Street. Residents and business people along the route are asked to suitably decorate their premises. Those not walking in the Procession should join in the prayers and kneel while the Blessed Sacrament is passing.

"Alien Disease"
"We also said they would never be allowed to leave the Fisheries Field where the Circus will be based. The nearest poultry farm is in Athenry and the jackdaws will either be in cages or in the perfor mance tent. We would be happy to facilitate condi tions of the Department in cluding daily inspections if they let the birds in." The Department replied saying the import of poultry including caged birds from France and elsewhere abroad is not permitted, because of the threat of introducing "alien diseases". "But where does that leave the famous Kerry

Fiona Reilly ofCorofin, winner of the Queen of the Wool at the All Ireland Sheep Shearing Championships held at Corofin on Sunday.