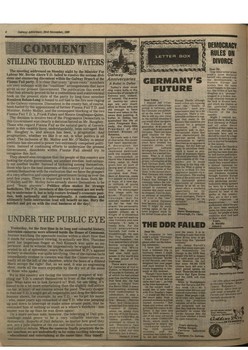 DM CAY E ORC R LS O UE N * D OC I RE V
Dear Sir, Your letter writer in last week's issue declared herself very pleased with the developments in Eastern Europe and wishes that the same would happen in this coun try. She writes of how her daughter is a "prsioner" trapped in a broken mar riage situation because of the lack of divorce here, and which she blames on the unelected rulers (meaning the Catholic Church) of the this country. Might I remind her, whoever she is, that unlike East Germany or Poland and all other Soviet satellites of that region, we have free elections and referenda here and we elected to reject by a huge majority divorce as a solu tion to marital breakdown in this society. To attack the Church in the way the writer does, and this has been done also by well known politicians, writers and lobbyists, just because they didn't get the result they wanted shows a blatant contempt for democracy. Your writer should know well that the new freedoms sweeping through Eastern Europe have nothing at all to do with pernicious secularhumanism being agitated for here by a small in tellectual clique aided and abetted by most of the media in this country. They are in fact a com plete rejection of materialims and godlessness which the peo ple have been enslaved under for forty years. Put simply, the people of these countries want God back in their society. Yours, B. Murphy. Athenry.

GERMANY'S FUTURE
Europe. Thirdly, although many critics are rejoicing over the "Death of Socialism", such pronouncments may be a bit premature. There is con siderable evidence to sug gest that many in the Eastern bloc countries are anxious for a genuine, socialism, not the repressive and, in fact, anti-socialist states that have characterised the post-war period. Soviet Communism is, rightly described as an aggressive ideology. But this does not apply to socialism itself, which is based on prin ciples of economic equity and social pluralism. If the achievements of Mr. Gor bachev are to mean anything in the long run, then the West is going to have to re-think it's own aggressive posture vis-a vis socialism. The scaling down of the arms race and the increased global awareness of common threats to us all on this planet offers a wonderful opportunity for c o operation between dif ferent ideologies. There is nothing "sacred" or "in evitable" about capitalism. Yours, Dieter Housemann, Kilcarragh, Co. Clare.

UNDER THE PUBLIC EYE

THE DDR FAILED
over the years. It is in teresting to note that even Egon Krenz tries to get away from this "planned economy". Dr. Jenny Farrell's point that many more peo ple demonstrate for change in the DDR than people who left in despair is a valid point and very true. However, the fact that some 200,000 DDR citizens have left over a short period speaks for itself. Those 200,000 do not believe that Egon Krenz and the DDR will ever change. When in Rudolphstein near Hof/Bavaria last Fri day week (10.11.89) I counted some 200 cars and some 60 motorbikes within 2 hours. Most people I talk ed to were very sceptical about the promised reforms. All of the visitors and emigrants told me that they took the first op portunity to cross the border because they did not know whether it would be open tomorrow... Yours sincerely, Philipp Hergett. Carraroe Industrial Estate, Carraroe, Co. Galway.

i Interior Decorating and Design.

....we offer advice and guidan in choosing Curtains/Blind Carpets / Wallpapers or Upholstery. Select from our wide range of samples. All Curtain and Upholstery wor carefully produced by our workshop.