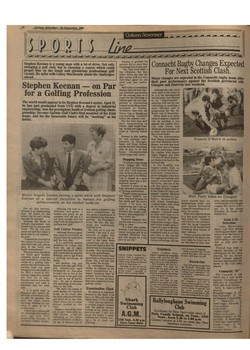 Stephen Keenan is a young man with a lot of drive. Not only swinging a golf club, but in choosing a course which could propel him on the tough and glamorous professional golf circuit. He talks with Linley MacKenzie about the challenges ahead.

Stephen Keenan -- on Par for a Golfing Profession
The world would appear to be Stephen Keenan's oyster. Aged 22, he has just graduated from UCG with a degree in industrial engineering; won the prestigious South of Ireland golfing cham pionship; become Galway Golf Club's first member of the Irish team; and for the forseeable future will be "working" at his hobby.

Keenan is grateful his parents did no more than encourage him to play golf. "Yes, they have been a big influence, but they never drove me onto the golf course. Golf is a very individual game so you need your own motiva tion." Motivation is something Keenan does not lack. Hav ing finalised sponsorship for the coming year, he is ready for the challenge of fulltime golf. His first com petition is representing Ireland in the Home Inter nationals in Ganton, Yorkshire; then onto the Senior Cup at Woodbrook representing Connacht before the season's end. For the first time he'll start concentrating on fitness - light weight train ing, cycling and jogging in stead of "playing myself fit". Keenan is also looking for new amateur tour naments in Portugal, Spain and Great Britain and for the first time being able to play in all four home championships which begin next April.

Connacht Rugby Changes Expected For Next Scottish Clash.
Major changes are expected in the Connacht rugby team after their poor performance against the Scottish provincial side Glasgow and Districts last weekend.
Although the side which went down to the Scots by 21- 6 at the Sportsground last Saturday was claimed to be "experimental", selectors will now be con centrating on moulding a more efficient unit in preparation for the AllBlack visit in November. While there is no great sense of urgency, Connacht will be needing a win against the weaker Scot tish side North and Midlands on September 17 to boost both morale and the record books. The two internationals Tom Clancy! Landsdowne) Francis O'Beirn in action and Noel Mannion (Corin thians ) are both due back from their tour of Canada with the Irish team, while the London Irish player Aidan Higgins and John O'DriscolK Manchester) are likely to be back in the forward line. In the backline Jim Staples!London Irish lis likely to return to his full back berth , joining the in jured Callaghan in his first five-eight partnership with regular scrum-half Conor McCarthy. Also out of the side that played Glasgow and likely to make a return to the Connacht ranks are regular centres Michael CosgrovefWanderers) and Matt Feely takes on Glasgow Robert Hernon(UCD), with Simon Geoghegan much wasted ball, in tries, and successfully con (London Irish) also vying discriminate kicks and verted led by 17-6. Glasgow poor passes prevented capped the match with a for his berth at wing. In the absence of these Connacht converting its ef last try in the closing minutes to finish the regulars , Connacht could forts into points. While they held the Scots match 21-6. do little more than try to hold the visiting Glasgow to a one point margin at and District X V to a half time(7-6), Glasgow Irish U-21 respectable margin. There and District run rampant Selection over the tiring Connacht were some bright spots to Aidan White(CorinConnacht's play in the first players in the second half half, as the forward pack revealing deep cracks in thian) and Eric Elwood (Galwegians)have been remained solid in scrums their defence. Twenty minutes into the selected for the Irish U-21 and even in the line-out count enjoying strong ter second half, the game was rugby squad which is ritorial advantage. But too over when the Scots ran in undertaking a two match tour of Italy later this for the third of their four month. Elwood has been a Irish Ironman in Malahide. Triathlete Doina completed the 25 mile regular member of the Galway triathlete Doina first and went Galwegians 1st XV, since Nugent completed an exhausting cycle in sixthplace, overall. on playing for his former to take place season with selection for the school Colaiste Iognaid, European Ironman competition and also represented Con and a win in the Irish Ironman. Knock-Out After breaking her foot in a Over 150 young people from nacht in the U-20 side.g cross-country race early on, the Westisde, Newcastle and played. Doina had two good placing in Shantalla areas took part in the national competitions to win Galway Youth Federation's "It's Connacht "B" selection as Ireland's only woman a knockout" competition over The Connacht B side in the European Ironman com the weekend. which has a trial match petition in Denmark. Aged between and Despite more than 70 com the competitors 9 took 12 years, against Corinthians on part in Saturday at Corinthian's petitors being pulled out of the balloons, water 2.5 mile swim suffering hypother events ivobjingFederation youth Park 3pm is as follows: and obstacles. mia. Doina. sponsored by Dawn worker.Martin Fitzgerald said Backs, M. Kean(Carrick-onDairies, completed the course in the event attracted large Shannon). 18th place; and six days later wasnumbers of young people who Monaghan(Creggs), E. D Gib backm Ireland to compete in the were not already active in clubs. bons(Ballinrobe), P. Car roll(WestportO, P. Forde(OLBC) M. Egan(UCD), Ballyloughane Swimming Dowd(Creggs). Forwards,GP. Slevin(Athlone). B Club Burke(OLBC), CostellodOLBC), M Enrolment for New T e r m takes place at Muiiins(Corithinians). M Holy Family School, o n Toes., 12th McDonnell! Athlone), R. Mar S e p t . , f r o m 3.30 t o 5.00 p . m . phy(OLBC), M. Ward(Creggs) Classes resume at 5.00 o n same day. N e w B. Brett(Sligo). Replacements, S members welcome. Brandon(Creggs), R. W t a ters(Sligo), J. Lee, J ConcannoniMonivea.

Stepping Stone
"It will be a big change from college life. With some good performances next year I will hopefully stay on the Irish team and perhaps look to the Walker Cup. It should be a good stepping stone into a pro fessional career." Keenan is aware of the huge demands and pitfalls of turning professional. "People claim someone like Ronan Rafferty has been inspired because he has made golf his entire career. I do have my engineering and I did not work at it for nothing. Whether this makes a dif ference physcologically I don't know yet." Whatever happens dur ing the next two years, one thing is clear. "If I don't play profes sionally, I can return to my career and play golf as an amatuer. Whatever way, golf will always be a big part of my life."

Angela Lupton at a special achievements,

having a quiet word with reception to honour his as his mother looks on.

For all this success, Keenan is an unassuming man. He knows he has talent, but he isn't taking success for granted. Winning the South of Ireland tournament last month was an unexpected boost. "For the last four years my golf has taken a back seat to my studies," he says. "I missed the first half of the season because of ex ams and I was only able to play in the North and South tournaments." The semi-final placing in the North gave Keenan valuable match practice and confidence, as did the words of a golfing com petitor who told Keenan his current form was good enough to win the South ti tle. With a crowd of Fifty Galway supporters behind the first tee at Sam, Keenan went on to win the tournament and with it selection into the Irish side It is a great start to Keenan's new career. He will now concentrate fully on golf for possibly the next two years before deciding whether he has what it takes to be a professional. "I nave never played golf for more than ten weeks a year, and with little pre pa ratio* because of university studies, he says.

"Playing full time is a different ball-game. I reckon two years as an amateur will tell me if I am good enough and can cope with the pressures of professional golf."

Although Keenan spent four years at university, he always knew he would give golf his best shot. It is a perfectly natural ambition for a man who, from the age of eight, scorned the beach for the golf course during summer holidays, and by age 16 had a golfing handicap of seven. His parents Jim and Ronnie both play golf. With four children (now aged between 25 - 21), Jim often brought one or two of the boys along to the golf club " to get us out of harms way". By age 14 Keenan was spending all his sum mers at the club. "We were too young to Examination Clash work during our summer He went on to represent break, so we would take Ireland in the Boys' U-18 the flask and sandwhiches team in 1964 and also the and head off to the club Youth team (U-22) in 1966. There were a lot of young "After that my universi fellows around at the ty studies always clashed time with the golfing season Keenan shared his first College is not really con set. of golf clubs with his ducive to golf. I don't just older brother a half set mean the study. I mean belonging to his father meeting new friends, hav which had been cut down. ing a bit of crack and By age 16 Keenan was at drinking."

last able to compete in the men's competitions. He was given a handicap of 16 and played in his first com petition - the President's Prize. He won. His han dicap was immediately lowered to 12. He went on to win the
SNIPPETS
Galway United Football Sup porters' Club is organising a support trip to Dublin for the I nited Verus Shamrock Rovers match on September 17. Bookings for this hip can be made at Terrykmd on Sunday during I'mted V DundaDt. or phone oel Connolly 66606.