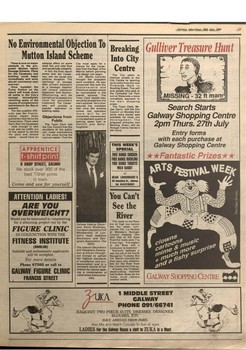 There is now no major obstacle to the pro posed Mutton Island Sewage Scheme. Plans for the Causeway and building could begin immediately and work should commence next summer. Once installed the Pump Station on the Island will break down all solids in the City's sewage immediately removing some of the causes of complaints by swimmers in the Bay at present. The last possible diffi culty was the Environ mental Impact Study published recently by the Corporation. There were fears that the Causeway - wide enough to take truck and car-traffic out to the Island to service the plant and remove waste - would have an

N E vr n e t l O j ci n T o n i o m na be to Breaking Gulliver TrecmreHunt o M to Island Shm Into City ut n ce e
adverse effect on some shell fish and tidal flow and would look unsightly. In fact the final report states that the Cause way will not cause any adverse situation. The discharge of sewage after primary treatment at a strategic location will ensure maximum dispersion and dilution. (Monitoring will be carried out to assess any need for secondary treatment). The Cause way will provide a popular extension to existing walks. City must apply for a licence for the Cause way from the Dept. of the Marine before planning and design can begin. Cllr. Martin Connolly thought the proposals were excellent. He was concerned that both the K n o c k n a c a r r a and Oranmore sewers would be incorporated in the overall scheme. The Town Clerk replied they would be phased into the main scheme. He further assured the members that once the scheme comes into operation there will be an immediate improvement in the aesthetic quality of bathing water both at Salthill and Ballyloughane.

Centre
The City plans to improve access to the City Centre by opening up an entry from the new Riverside Walk to Bowling Green. This will give people who park at the Cathedral Car Park and at Waterside a more immediate approach to the main shopping areas. The Town Clerk, Mr. Joe Gavin, told the City Council on Monday that some extra money was available for inner city d e v e l o p m e n t . The proposed entrance into Bowling Green will be through Tommy Tierney's old home.

OBJECTIONS FROM PUBLIC
The Town Clerk told the City Council that the members of the public can make submissions on the plans during the next six weeks. Then the

ARE YOU OVERWEIGHT? FIGURE CLINIC
IN CONJUNCTION WITH THE

You Can't See the River
The reeds on the River are so high you cannot see the water, com plained Cllr. Liz Hackett at Monday's Borough Council meeting. She said that at the Dyke Road the reeds were 7 to 8 feet high. "It is neglect of the River and a hindrance to boatmen". Everyone believed it was the job of the Corrib Navigation Trustees. But Cllr. Martin Connolly felt they were only respons ible for the River from the Commercial Club up. Anyway, the Trustees' weed-cutting machine had broken down so the reeds must remain another while.

Galway Interior Decor ator. Kevin Mullarkey, has been elected to Full Membership of Lon don's most selective Decorators and Des igners Association. The IDDA. The Interior Decorators and Designers Associa tion is known through out Europe to uphold the highest standards of excellence and pro fessionalism and is a constant source of ref erence by clients seek ing a combination of experience and practic ality.