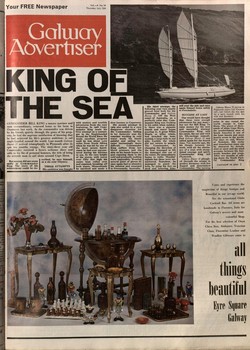 ICING
B^^B i^^^B^
COMMANDER BILL KING a master mariner and man extraordinary, returned home to his farm in Oranmore last week. As the commander was driven by his friends quietly through the gates of his prop erty, he had the supreme satisfaction of knowing that he had achieved his life's greatest ambition: to sail single-handed around the world. Last month Galway Blazer II arrived triumphantly in Plymouth after its epic ten months voyage. The sixty-three year old Commander received a hero's welcome there and adds to his list of personal honours, the title of being the seventh man to sail alone around Cape Horn.
But success did not c o m e easily to Commander King. T h e s t o r y o f h i s achievement could be de scribed, he says himself, as a six year Odyssey. THREE ATTEMPTS His ambition was fraught with anxiety and terrible adventures from the very b e g i n n i n g . I n 1968 C o m mander King m a d e his first attempt as a contest ant in the Singlehanded Round the World Race. He m a d e excellent progress until he was about 1,000 miles f r o m South Africa w h e n he was hit by one of the m o s t severe hurri canes he had ever encoun tered during his lifetime at sea. At the v e r y height of the storm, with waves over fifty feet high his entire boat rolled over and capsized, breaking off both masts. Miraculously he survived and made a slow journey to Capetown. His second attempt in 1969 a l s o e n d e d i n a v e r y dangerous situation for the C o m m a n d e r . Sailing in icy Antarctic seas the constant working in cold water m a d e his hands painful and sailing b e c a m e increasingly m o r e difficult. Commander King suffers f r o m low blood pressure and the skin o n his hands began to peel exposing t h e m to the cold and gradually making work impossible. Wearing several pairs of gloves he once again had to abandon his mission and returned to Freemantle, Australia. His third attempt, the following year very nearly proved fatal both for the Commander and Galway Blazer II. O f f t h e W e s t coast > of Australia, on a perfectly c a l m day, C o m mander King was working in his cabin when sudden ly there was a gigantic smash and water began pouring in. A great White Shark, or killer whale, had attacked the boat, making a large hole in one side. Luckily the whale did not return to attack. The Commander, by changing the direction of t h e b o a t m a n a g e d t o lift the d a m a g e d side out of the water. He immediately began to radio 'Mayday' signals but these were un answered. Somehow, he managed to patch the hole, b y tying his feet on deck and lowering h i m self over the side and once again l i m p e d h o m e safely to Freemantle. SUCCESS AT LAST One would have thought that these were enough adventures for any m a n -- but not for Bill King. To raise m o n e y for his next and successful attempt Commander King sold his cattle, his car and with his life-savings remodif i e d Galway Blazer II a n d sailed again for the fourth time. Ten m o n t h s ago, the bit firmly between his teeth, w i t h all the obstin acy of a m a n with excep tional courage and spirit, Commander King left Plymouth. Galway Blazer II p l o u g h ed through the oceans in perfect h a r m o n y with her dogged and determined C o m m a n d e r . The turning Galway Blazer II arrives in P l y m o u t h u n d e r full ' C h i n e s e sail', just before she was met b y a navy launch with his wife a n d daughter. point in any round the world v o y a g e is Cape Horn. The grave of thou sands of ships Cape Horn, the southernmost area of S o u t h A m e r i c a is one of the least known and most hostile areas in the world. For days on end, Winter or S u m m e r , this rocky and treacherous coast can be obscured by drizzle, sleet or snow and the wind s c r e a m s between the Ant arctic beaches and crags. After two months of sail ing down the South Paci fic Commander King Continued on page 2

Come and experience the magnetism of things Antique and Beautiful in our jet-age world. See the sensational Globe Cocktail Bar. All items are handmade in Florence, Italy for Galway's newest and most colourful Shop. For the best selection of Onyx Chess Sets, Alabaster, Venetian Glass, Florentine Leather and Wooflen Giftware come to