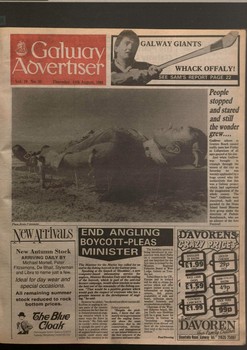 People stopped and stared and still the wonder grew....
Gulliver ashore at Gratten Beach caused traffic jams last Friday as Lilliputians of all ages gasped at his size. And when Gulliver was brought in triumph through the streets of the city an Saturday he was warmly applauded by a huge crowd who felt instinctively that this was a Galway project which had captivated the imagination of the whole county. The "two" Gullivers were conceived, built and paraded by the Nuns Island based Macras Arts group under the direction of Padraic Breathneach, who are an adjunct of the Arts Festival!

END A N G L I N G BOYCOTT-PLEAS MINISTER
The Minister for the Marine has called for an end to the fishing boycott in the Galway area. Speaking at the launch of 'Hookline', a new computer-based information service for anglers, Minister Brendan Daly said the ending of the boycott, which is part of the anti-rod licence campaign, would allow tourists to make the best out of the remainder of the fishing sea son. "That would be a positive gesture which would gain the respect of everyone who has a genuine interest in the development of angl ing." be said.
However he added, " w e should not allow current dif ficulties in angling in cer tain parts of the country fullest potential. to obscure the fact that w e "Despite the prob in Ireland possess an angl lems, I know that ulti ing resource which is in mately we in government many ways the finest in and the angling frater the w o r l d . " M r . Daly said nity share the same he couldn't stress strong objectives: that is, the ly enough the need to get conservation, developback to a position where metn and management all anglers both native and of our inland fisheries in tourist could enjoy and the best interests of the utilise this resource to its resource and users alike.

T h e hookline service is being introduced in con junction with Bord Failte on a countrywide basis and was launched for the first time in Ireland by the Western Regional Fisheries Board at W e i r L o d g e , Galway on Tuseday last. Subscribers in the U K , Europe and in Ireland will be able to obtain the service which will offer anglers instant access to information on angling centres, fish prices, availability o f rods and boats, pollution alerts, weather forecasts and accomodation available. Chairman of the West ern fisheries board, M r . Joe Duffy says Hookline will be a great boost for Tourism in Galway as "Intending angling tourists from abroad will have all the information they need at the touch o f a button." PaulDeering