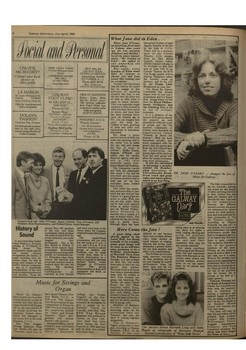 DOLAN'S FASHION
Opposite Reg. Hospital For that special occasion and at the right price see our large selection of Ladies Dresses.

When Jane O'Leary, an American, first came to Galway nine years ago she was instantly delighted and thrilled loved the place immed iately. "My Garden of Eden", she sighed as she unpacked the family silver. But sadly, every Garden of Eden must have its serpent to thwart you and Jane found that Galway was no exception. It wasn't that Jane found that the Galway air caused her to engage in dire activities or anything dreadful like that, it was the fact that the place had so little to offer when it came to music concerts. This is an especially tough situation to find yourself in when you have been reared on music, and since Jane has been studying music since the humble age of five, you can imagine how upset this made her. Gallons of tears, ghashing of teeth and other such expressions of frustration abounded. But being a pretty positive person at heart she woke one morning, said to the world "Let us tackle this sad lack and change the face of music in Galway". E r i k a Casey, A n g e l a O'Keefe and others who felt equally deprived agreed with glee a n d in 1981 t h e s e wonderful people estab lished M u s i c for Galway. The Committee started out with the philosophy that music is fun and for everybody and that people in Galway should be able to hear and see the best musicians from Ireland and abroad. This belief has contin ued, and according to Jane word has got around that Galway is a good place for artists to come. Well, you can see why really. After you've had such talented artists as James Galway and the Warsaw Philhar monic O r c h e s t r a to mention but a couple, it's easy to attract others. The schedule for the rest of this year is pretty hectic although there has been

disruption of plans ot some degree, because of the fire in the Aula in U.C.G. There will be a perform a n c e in t h e C a i r n e s Theatre, U C G tonight, from an East Berlin Quartet, Gerard Gillen, Dublin organist will play in St. Nicholas' on May 24th and on June 14th in the Cairnes Theatre, the RTE Van Brugh quartet will be playing. Highpoint before the Summer break up however, will be the visit by the F r a n z L i s z t O r c h e s t r a on June 2nd. The Music for Galway Committee has already begun work on next year's programme and it is hoped that, among others we will have the R o y a l P h i l h a r monic Orchestra and t h e S a l z b e r g T r i o to lift u s o u t of o r d i n a r y existence. It is a measure of the success of the group that all the concerts are well attended by different types of people and that the business community of Galway have launched an organisation called "Friends of Music for Galway". Well ten local businesses actually, and when combined with the grants that the group gets from the Arts Council and the Corporation, the money that will be received from this new group will allow the society to become even more adventurous. // you are interested in becoming a member contact tke Memberskip Secretary, 17 Tkreadneedle Road. DR. Great crack and great value and music galore, wkick is no bad thing.

History of Sound
A very interesting Audio/ Visual Display is presently running at O'Connors in Shop Street. This presentation which runs for just twenty minutes encapsulates the history of sound recording since the earliest times. As well as giving brief snippets of the world's famous composers it also is a remarkable demonstration of the very latest in sound reproduction loud speakers. From the

famous' Bose 901 speakers to the very very latest verv . acoustimass which produce 100 watts of sound from the tiniest enclosures you could imagine (see photograph). This is the first launch in Ireland of these world famous Bose acoustimass. Remarkable enough they are being made entirely in Carrickmacross, Co. Monaghan where Bose employ one hundred and ten people and have been in business there for over ten years. The speakers manufactured in Carrickmacross are exported all over Europe

and some even back to the States where the company originated some thirty years ago. The Audio/Visual presentation will run each day this week at 11 a.m., 4 p.m. and 5.30 p.m. It is of particular interest to school groups or students and bookings may be made outside these times or a special presentation to a class or a group by phoning Richard Byrne, Audio Manager at O'Connors 61777. This special demonstration of Bose hi-fi equipment will finish on Saturday next.

Music for Strings and Organ
'Music for Galway' have invited two very fine String Quartets to play in Galway and also plan an organ recital to fill the gap left by the cancellation of all recitals involving the Steinway G r a n d piano which was damaged in the recent fire in the Aula Maxima, U . C . G . The Tim Vogler S t r i n g Q u a r t e t from East Berlin will play on Thursday, April 21st in the Cairnes Theatre, New Arts Block, U.C.G., at 8.00 p.m. This Quartet won the prestigious Evian Competition in France in 1986. Previous winners of this competition include the Takacs and Prazak Quartets. Their pro gramme will include Bartok's 6th Quartet. G e r a r d G i Hen. one of Ireland's most celebrated organists, Professor of M u s i c at M a y n o o t h College, and Titular Organist of the ProCathedral, Dublin, has accepted an invitation to give a recital in St. Nicholas' Church on Tuesday, 24th May. T h e RTE Van Brugh Q u a r t e t will perform in Galway on J u n e 14th. They made their Irish debut during the Arts Festival in 1986 and this will be their first recital here since then.

A good thing shall shortly appear in the Jesuit Hall, Sea Road; actually to be truthful, many good things will be seen, as we will have what promises to be a brilliant performance of Westside Story from The Ren more Musical Society. It is due to begin on May 5th, two weeks from now, so don't say you haven't been warned. Westside Story is of course that famous musical which deals with the conflict in New York between two gangs, one American, The Sharks, the other, Puerto Rican, the Jets. What happens when Tony, leader of the Sharks falls in love with Maria, whose brother is head of The Jets forms the basis of the story, and it's all pretty exciting and gripping stuff. Members of Ren more Society have been beavering away on the p r o d u c t i o n since last February and now the show is coming together delightfully. T h i s is R e n m o r e ' s biggest production to date and, according to Therese Kennedy, P.R.O. of the S o c i e t y , it was very

difficult to cast because there were so many diverse roles, some needed an equal balance of singing, dancing and acting, some demanded a greater ability for one than another, and other such complications. The brilliant production team, however, overcame all these problems and all are now hoping for superb performances when the doors open and the run begins. Rehearsals are now

taking place at an amazing rate, about five nights a week, singing, dancing and acting are practised rigorously, which leaves the cast and t h e i r supporters little time for any outside mischief. Just about everybody performing in the Westside Story has had experience either with Renmore or the various other drama and musical societies around town, so we can expect them to be poised and polished.

The folks responsible for the set, costumes, lighting and sound are also people of talent and long practised at their various arts and again are content only to provide the best. Last year in t h e c o m p e t i t i o n s between the different musical societies the group was nominated for various awards for both perform ance and technical areas for their production of "On the Tweniiety Century". According to Therese Kennedy the aim isn't to win awards, it is to put on a good performance, but a good performance usually does lead to recognition and it is to be hoped that Westside Story is quite complex. The orchestra therefore is o n e of t h e g r e a t e s t expenses of the show. Putting on ten perform ances of such a show is no easy task, nor is it cheap. Because the membes have been so busy organising the production there has been little time to concentrate on the financial end of things but one of the problems that the Society has at present is the lack of a major sponsor. T e l e c o m E i r e a n n and the B a n k of Ireland have helped, but if anybody out there with the necessary cash is interested u> helping a dedicated and talented bunch of people who are doing a great )ob, don't be shy, the people in the Renmore Musical Society will welcome you with open arms. The show will start on May 5th and tickets will be available from Lydons, Prospect Hill, Lydons, Williamsgate Street, Duggans Supermarket, R e n m o r e , a n d from Committee members, u o a l o n g a n d don't forget t h e tissue o r two.