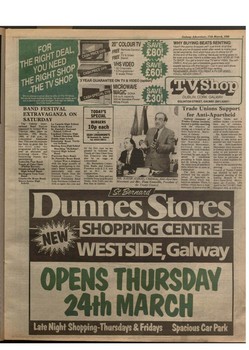 WHY BUYING BEATS RENTING
Hasn't the penny dropped yet? Just think of all the pounds you've dropped week after week to make your rental payments. And what have you to s h o w for it? At the end of the day, nothing! B e c a u s e renting g o e s on for ever and ever. Here's a better way. BUY NOW AT THE TV SHOP. You get a brand new TV set or Video. You will OWN it And you get unbeatable guarantees and superb service into the bargain. Call in and we'll s h o w you how buying is CHEAPER than renting. REMEMBER, WHEN YOU RENT A TV OR VIDEO YOU'LL NEVER OWN IT.

T r a d e Unions Support for Anti-Apartheid
Galway company of Trades Unions recently hosted a public meeting with the objective of setting up a branch of the Anti-Apartheid Move ment, in Galway. Addressing this meeting, Kadir Asmal, Chairman of the National AntiApartheid Movement, outlined three main reasons why such branches s h o u l d be set u p . Everyone, he said, must be aware of conditions prevailing in South Africa and be willing to combat the racial form of apartheid there which has its roots in Colonialism. The first reason he outlined was the specific nature of Apartheid in South Africa which was based on violence. There, 5 million whites have a total monopoly of power over 24 million blacks and 1 million Asians - a system born out of violence, maintained by violence and supported by the collabor ation of multi-nationals. Mr. Asmal criticised the Irish Government for failing to take action and pointed out that branches of the Anti-Apartheid Movement were necessary in Galway and elsewhere in order to put pressure on the Government to get off the fence in particular as there is a clear mandate for decisive action. Due to the success of this meeting Galway Council of Trades Unions has decided to hold an inaugural meeting of the Galway Branch of the Anti-Apartheid Move ment on Tuesday, 12th April in the I T G W U Hall, Prospect Hill, at 8.00 p.m.

for the first time we are pleased to welcome the Touch of Class Choir from San Francisco who will also be on stage in Leisureland. Ms. Bernadette Comerford, Radio and Concert Presenter with R.T.E. will act as M.C. for the Competition. Tickets are Free and are available from local Record Shops, Aras Failte and the Bon Bon in Salthill.