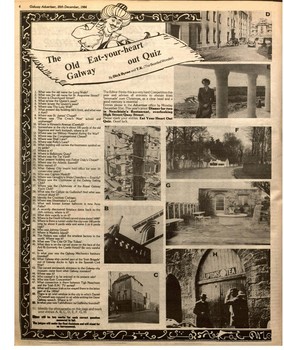 What was the old name for Long Walk? What was the old name for St. Augustine Street? Where is Churchyard Street? What is/was the Queen's pass? Where is/was the Queen's pass? Where was The Lazy Wall? What present day building did it front, and what was it then? 8. Where was St. James' Chapel? 9. Where was T h e Crow's Nest' school and orphanage? 10. Where is Kirwan's Avenue (Careful)? 11. Somewhere in the city is about 100 yards of the old flagstone and kerb footpath, where is it? 12. Where was tne Military Hospital during the War? 13. Where was the Congregational Chapel? 14. Where was Shell Lane? 15. Where was Kelly's Lane? 16. What building still carries the freemason symbol on its gable? 17. Where is it? 18. Where is Ballyknow Quay? 19. Where was the Tar Yard? 20. What present building was Father Daly's Chapel? 21. Where was the Atlantic Sawmill? 22. Who owned it? 23. What Galway City mayor held office for over 10 consecutive years? 24. Who was Captain Meskill? 25. Where was Geraghty's Ships Chandlers -- Exactly? 26. Where was the Clubhouse of the Galway Sailing Club? 27. Where was the Clubhouse of the Royal Galway Yacht Club? 28. What was the Cathair na Gaillimhe? And what was unusual about it? 29. Identify the Countess Cadogan. 30. Where was Shoemaker's Lane? 31. What well known former ballroom is now Arus Failte? A recently discovered fireplace dates back to the 16th century, where is it? What date exactly is on it? Where is the Death's Head carved stone dated 1488? Where is there a tunnel under the city over 100 yards long by about 4 yards wide and some 5 or 6 yards high? Who was Johnny Green? Where is Madeira Island? The Nailers was called the smallest factory in the world. Where was it? What was T h e Citie Of The Tribes'. What date is on the carved stone on the face of the Ard Ri (formerly the Castle Hotel)? Be very careful here. In what year was the Galway Mechanics Institure founded? What Galway ship carried part of the 'Irish Brigade' out of Galway docks to fight in the Spanish Civil War? The carved stonework entrance to the Galway city musuem came from what Galway mansion? Where was it? Who caused it to be erected in its present site? Who was Eoin Concannon? What connection is there between Tigh Neachtain and the Irish R.M.' TV series? What well known Irish actor stayed there in the latter part of the 1920s? 49. There is an oriel window in the city in which Daniel O'Connell was reputed to sit while writing his Great Galway speech. Where is it? 1 0 . fat what year was Taibhdhearc na Gaillimhe founded? 51. Identify the photographs on this page and mark your entries A, B, C, D, E, F, G, H. Bjkja fca t w o Marks far each correct hi ML