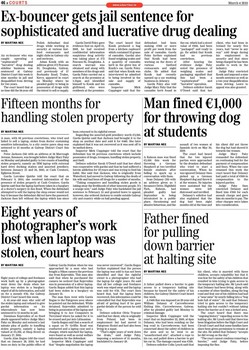 Ex-bouncer gets jail sentence for sophisticated and lucrative drug dealing
BY MARTINA NEE An ex-bouncer who was caught operating a "sophiscated" and "lucrative" drug dealing sideline business was sentenced at Galway District Court this week to nine months in jail and disqualified from driving for two years. The court heard that at no time did the 24-year-old Polish defendant deal drugs while working in security at various fastfood restaurants and night clubs in Galway city and environs. Adam Konik with an address given 172 Fearann Ri, Doughiska, Galway, and previously of 17 Bochanby Road, Tralee, Kerry, appeared in court on Monday where he pleaded guilty to being in possession of drugs with the intent to sell or supply. Garda David Foley gave evidence that on April 11, 2009, he had received confidential information suspicious drug activity was taking place at 172 Fearann Ri, Doughiska. A search warrant was obtained and along with members of the drugs unit Garda Foley carried out a search at the premises at 3.55pm and identified himself to Konik and his girlfriend, who were residents at the premises. The court heard that Konik produced a bag from a kitchen cupboard which contained 53 grams of cannabis. Gardai also found weighing scales and a quantity of cannabis herb in the glove box of Konik's car. Garda Foley said that when Konik was interviewed he admitted to being involved in the sale and supply of cannabis. Inspector Mick Coppinger said that the defendant had been making 300 or more profit per week from the sale of cannabis. Garda Foley further explained that Konik had been working on the doors of various fastfood restaurants and night clubs. He added that Konik had recently opened up a car washing business in Athenry. Garda Foley also told Judge Mary Fahy that the cannabis herb found in the car, which had a street value of 600, had been "packaged" and ready to go. He added that Konik had no previous convictions. After hearing the evidence Judge Fahy noted the presence of weighing scales and packaging signified that this had been a "sophisticated" and "lucrative" operation. Defence solicitor Sarah O'Dowd said that her client, who had been in Ireland for nearly five years, had "never in any way" sold drugs during his employment in security and that since being charged he has been unable to work in the industry. Judge Fahy convicted Konik and imposed a nine month sentence as well as a two year disqaulification from driving. Leave to appeal was also granted.

Man fined 1,000 Fifteen months for handling stolen property for throwing dog at students
BY MARTINA NEE A man, with 66 previous convictions, who tried and failed to sell a laptop, stolen from doctor containing sensitive information, to a city centre pawn shop was setenced to 15 months at Galway District Court this week. Peter Jackson (34) with an address at 24 Murrough Avenue, Renmore, was brought before Judge Mary Fahy on Monday and pleaded guilty to two counts of handling stolen property, namely an IBM laptop with external hard drive docking station and assorted jewellery, between January 15 and 30, 2010, at Cash Creators, Eglinton Street. Garda Lorraine Quirke told the court that on February 9, 2010, she received information of the presence of stolen property at Cash Creators. Garda Quirke said that the laptop had been taken in a burglary at a doctor's surgery in Sea Road. When the defendant attempted to sell the laptop the shop owner would not buy it because the defendant did not have the password. Jackson then left without the laptop which has since been returned to its rightful owner. Regarding the assorted gold jewellery worth 2,500, Garda Quirke said that Jackson had brought it to the shop on another date and sold it for 440. She later explained that it was not recovered as it was sent off to be melted down. Inspector Mick Coppinger told the court that the defendant has 66 previous convicions which include possession of drugs, tresspass, handling stolen property, and theft. Defence solicitor Sarah O'Dowd said that her client was cooperative with gardai and that he had suffered a heroin addiction for 19 years and was trying to feed his habit. She said that Jackson, who is originally from Waterford, had moved to Galway following the death of his wife and had been off drugs for a number of months. "Taking computers and handling stolen goods is taking away the livelihoods of other innocent people. It's a scurge now," said Judge Fahy who backdated the jail sentence to February 11 and granted leave to appeal, however, she ordered Jackson to reside outside Galway city and country while on bail pending appeal. BY MARTINA NEE A Rahoon man was fined 1,000 this week for throwing a German Shepherd at two terrified female students after failing to spark up a conversation with them. Sean Delaney (29) with an address given as 5 Sycamore Drive, Highfield Park, Rahoon, had pleaded guilty last September to being intoxicated in a public place, threatening and abusive behaviour, and the assault of two women at Spanish Arch on May 20, 2009. The court had heard that the two injured parties were approached by the drunken defendant who tried to start a conversation. When he was ignored Delaney then picked up a German Shepherd dog and threw it at the women. No injuries were sustained but the women were left distressed and terrified. Delaney's solicitor had also explained that the dog had been eight months old at the time and his client did not throw the dog but had shoved it towards the women. Judge Mary Fahy remanded the defendant on continuing bail for the payment of compensation and fines. When the case resumed this week the court heard that Delaney had paid a total of 800 in compensation to the injured parties. Judge Fahy then convicted Delaney and fined him 500 for each assault charge and gave him six months to pay. The other charges were taken into consideration.

Eight years of photographer's work lost when laptop was stolen, court hears
BY MARTINA NEE Eight years of college and freelance work built up by a photographer went down the drain when her laptop was stolen in a burglary, wiped of all its information, and sold on for a measly 50, the Galway District Court heard this week. A 41-year-old man who sold off the stolen laptop and refused to give gardai information on its whereabouts has now been sentenced to 11 months in jail. Dzemisas Kejevnikis of no fixed abode appeared before Judge Mary Fahy on Monday and entered a last minute plea of guilty to handling stolen property, namely a laptop valued at 1,500, at Shop Street on January 27, 2010. Garda Alan Regan told the court that on January 28, 2010, he had been on duty in the public office of Galway Garda Station when he was approached by a man who had bought a Nikon camera the previous day from Kejevnikis. This man also said that when he purchased the camera he noticed that Kejevnikis was in possession of a silver laptop. Garda Regan added that this laptop had been stolen in a burglary on January 21. The man then went with Garda Regan to the Fairgreen area where he pointed out the defendant. While detained, Kejevnikis admitted to being in possession of the laptop and bringing it to Ace Computers in Terryland where he asked for it to be erased and put into Lithuanian. Garda Regan said that a search of a squat on Fr Griffin Road was conducted and a laptop case and a charger, which matched the laptop, were found as well as social welfare information for the defendant. Inspector Mick Coppinger said that "despite negotiation the laptop was never recovered". Garda Regan further explained that the person the laptop was sold to has not been identified and that the rightful owner is a photographer who had the laptop for eight years. He said that all her college and freelance work was wiped away and the laptop was sold for 50. The court then heard that, had the laptop been recovered, this information could be reinstalled but that Kejevnikis was afraid of getting hurt if he gave gardai details of the person he sold it to. Defence solicitor Olvia Traynor said that her client, who is originally from Poland, had been in employment but had moved to Fairgreen Hostel and had also been living in a squat. "That's eight years of work down the drain," said Judge Fahy, imposing a sentence of 11 months, backdated to January 29.

Father fined for pulling down barrier at halting site
BY MARTINA NEE A father pulled down a barrier to gain access to a temporary halting site because he feared for the safety of his children, the Galway District Court heard this week. A 400 fine was imposed on 29-year-old William Delaney of Carrowbrowne Halting Site, Carrowbrowne, Galway, after he pleaded guilty last Monday to criminal damage. Inspector Mick Coppinger told the court that on September 22, 2009, at 6pm Delaney, who had been residing on the bog road in Carrowbrowne, had been concerned about the safety of children in the area and so he went to an "unauthorised site", attached a rope to his car, and pulled down a barrier to get his car in. The damage caused was 300. Defence solicitor Colin Lynch said that his client, who is married with three children, accepts culpability but that it was fear for the safety of his children that resulted in him trying to gain access to the temporary halting site. Mr Lynch said that Delaney had been living, along with a number of other families, along the bog road and that one of his children had had a "near miss" by nearly falling into a "bog hole full of water". He said that Delaney tried to gain access to the temporary halting site but couldn't without taking down the barrier as it was a locked area. The court heard that there was "ongoing history" regarding access to the halting site. Mr Lynch said that there has been litagation before the High Court and Circuit Court and that some families have since been given permission to remain at the site. He added that Delaney "accepts he did wrong on the day". "The court cannot condone removing a barrier," said Judge Fahy, before imposing the fine.