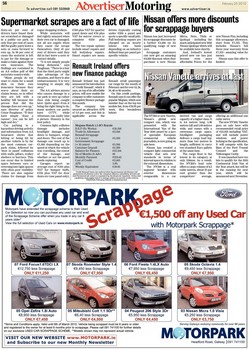 AdvertiserMotoring
300 plus VAT for quarter panel dents and 50 plus VAT for mirror covers or complete 150 plus mirror. The two repair options include smart repairs and full bodyshop repairs. Smart repairs are menu driven (typically costing under 200 a panel and quote a specific small job). Full bodyshop repairs are charged on an hourly labour rate basis depending on an industry defined time per panel per specific vehicle. Nissan has just increased its scrappage discounts by a further 1,000 on its qualifying range of new cars. Scrappage customers can now get an amazing 4,000 discount when they purchase a new Nissan

Supermarket scrapes are a fact of life Nissan offers more discounts
Sixty-six per cent of drivers have found their car scratched or damaged in a public car park. In only four per cent of cases did the guilty party leave a note or come forward to own up. In 96 per cent of cases the motorist is left to pay for the damage or make a claim against their own insurance. The findings are contained in an AA online poll of 800 motorists countrywide. "Many people do not want to claim for a small dink on their own insurance because they worry about their no claims bonus, so in effect they are left with a healthy bill because the person that did the damage does not own up," says director of policy Conor Faughnan. "If they have simply `done a runner', you can be left high and dry." Car parking is a hazardous driving activity and information from AA Insurance shows that hitting or being hit by another vehicle is by far the most common carpark claim, followed by `door to panel' collisions with walls, pillars, trolley shelters or barriers. This can occur due to limited space between cars or reversing into tight spaces with often poor visibility. There are also regular claims for damage from rogue shopping trolleys. While motorists will feel rightly annoyed when their own car is damaged, not all are angels when they cause the scrape themselves. Only 47 per cent of drivers said they did in fact leave a note or contact details. "It is not simply people being dishonest." says Faughnan. "There is a fear that the third party might take advantage of the situation, and there is also embarrassment. It is very tempting to simply slip away." The AA advises anyone who causes damage in a car park to own up rather than risk being caught later. Quite apart from it being the right thing to do, many modern car parks have CCTV, while witnesses can easily take a picture. Honesty is the best policy. Common light collision damage includes headlight damage, and dents to bumpers, wings and doors. The cost of the damage can reach up to 1,000 depending on the speed at which the vehicle was travelling, the extent of the damage, and whether or not the panel needs replacing. Garages report an average cost of 250 plus VAT for bumper buffs, 350 plus VAT for door dents etc (one panel only),

for scrappage buyers
Micra, Note, Tiida or Qashqai - including the much anticipated new 2010 Nissan Qashqai which will be available here shortly. And, Ireland's lowest priced new car has just become even more affordable. Prices for the

Renault Ireland offers new finance package
Renault Ireland has just announced the introduction of 'Credit Renault', which it says, on top of its affordable prices, will now enable the company to offer customers a complete finance package this month. The company has secured an attractive APR of 5.9 per cent, and this is applicable across the Renault retail passenger car range for the month of February and for over 12, 24, 36, 48 or 60 months. On this credit package, Renault says it can offer the popular Megane, which now number four on the top ten models list, from 59.95 per week. (See breakdown below)

The NV200 or new Vanette, Nissan's global new compact van, which was presented with the International Van of the Year 2010 award by a jury of specialist European commercial vehicle journalists, is now going on sale here. Nissan has created a compact light commercial vehicle that sets new standards in terms of internal space in relation to the external dimensions. The NV200 is a real segment breaker with exterior dimensions comparable to a car

derived van and cargo capacity of a higher class. It is 4.4 metres long, 1.86 metres tall and 1.69 metres wide, and comes with a cavernous cargo space. Intelligent packaging delivers a cargo load bay more than two metres in length, sufficient to carry two standard Euro pallets at the same time. The cargo floor is the lowest in its category, at only 524mm. As a result, the NV200's load cube offers a cargo volume of 4.2 cubic metres, about 25 per cent greater than the competitors' average,

offering an additional one cubic metre. The new NV200/ Vanette goes on sale here with recommended retail price of 15,925 including VAT, and will include power windows and power locking in the specification. It will compete with the likes of the Ford Transit Connect and the Volkswagen Caddy. It was launched here too late to qualify for the 2010 Continental Irish Van of the Year award, but will be in the running for next year, which will be announced next November.