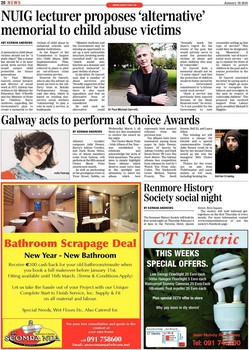 NUIG lecturer proposes `alternative' memorial to child abuse victims
ABY KERNAN ANDREWS A memorial to child abuse victims should not be "a static object" like a statue but should be a 24 hour social work service that would ensure child protection for future generations. Dr Paul Michael Garrett, senior lecturer and director of social work at NUI, Galway has written to the Minister for Education Batt O'Keeffe and the Minister of State for Children Barry Andrews, regarding the Government's plan to create a memorial to the victims of child abuse in industrial schools and similar institutions. In the Report of the Commission to Inquire into Child Abuse, 2009: Implementation Plan, Minister Andrews referred to plans to pilot an out-of-hours crisis intervention service. However Dr Garrett, who is also the adviser on social services to the AllParty Irish in Britain Parliamentary Group, said this idea, which is based on existing dayservice social workers `volunteering' to play a role in such a service, is inadequate. "Minister Andrews and the Government may be missing an opportunity to set up a new nationwide structure, involving newly recruited staff," he said, "which would also function as a dynamic and practical `memorial' to past victims of abuse." In his letter, Dr Garrett says that a number of abuse survivors are "broadly supportive of the memorial idea" but that there is also much opposition, and that an alternative form of memorial should be considered. He said such an alternative could "formally mark the State's regret for the events of the past, but would actively serve to assist the present-day victims of abuse and other children who may be vulnerable". Dr Garrett feels a memorial should not be "a static object" and that the protection of children would be better served by a Government commitment to "a 24 hour social work service". "Such a service has previously been rejected because of the likely financial costs," he wrote. "Is it not possible for the Government to now reconsider setting up this type of service? This could then be designated, eg, `Memorial': A nationwide `out-of-hours' social work service - set up to remind the State of its failure to protect children in the past and to ensure protection in the future." Dr Garrett concluded his letter by saying such a service " might go some way to recognise the failures and oversights in the past in respect of vulnerable children". The proposal has received support from Labour party president Michael D Higgins.

Galway acts to perform at Choice Awards
BY KERNAN ANDREWS Athenry vocalist/ composer Julie Feeney, Barna's Adrian Crowley, and Dark Room Notes, two of whose members come from Galway, will perform at the fifth annual Choice Music Prize awards next month. As well as performing at the prestigious event in Vicar Street, Dublin, on Wednesday March 3, all three are also nominated to receive the award on the night. The Choice Music Prize - Irish Album of the Year was established to celebrate and acknowledge the work of Irish musicians. The prize aims to simply highlight those albums which deserve some extra time in the spotlight and, ultimately, to select the album which best represents Irish musical releases from the previous year. Ten albums have been nominated, among them pages by Julie Feeney, Season Of Sparks by Adrian Crowley, and Dark Room Notes' We Love You Dark Matter. The Galway albums face competition from releases by And So I Watch You From Afar, Codes, The Duckworth Lewis Method, Valerie Francis, The Swell Season, Bell X1, and Laura Izibor. The winning act will receive a cheque for 10,000 and a special commemorative trophy. Julie Feeney could be in line for her second Choice award as she won the inaugural 2005 Choice award. Tickets for the event are on sale from Ticketmaster and usual outlets at 27 each, including booking fee.

Bathroom Scrapage Deal
New Year - New Bathroom
Receive 300 cash back for your old bathroom/ensuite when you book a full makeover before January 31st. Fitting available until 16th March. (Terms & Conditions Apply) Let us take the hassle out of your Project with our Unique Complete Start to Finish Service, Inc. Supply & Fit on all material and labour. Special Needs, Wet Floors Etc. Also Catered for.
For your free consultation and quote in the comfort of your own home