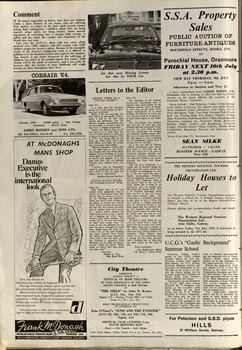 Comment
I T IS almost impossible to believe that there are children within a short distance of our homes who are suffering from neglect, or subject to the dark subtle mental stresses arising from unhappiness -- children whose lives are being marred, whose spirits are being broken, whose natural enjoyment of everything that a normal child accepts, is stifled and for whom the wonder and excitement of the World does not exist. Last year the I.S.P.C.C. dealt with new cases which involved over 7,000 children, and 659 couples with 2,305 children sought the Society's advice. Because of the intangible results of the Society's confidential work, it is difficult to publicise it in the dramatic fashion that captures the imagina tion. Society is not much interested in the sufferings of children, but rather in the scandal aspect. Yet, today's child victims will be the adults of tomorrow, and it can easily be foreseen that the burden of their childhood will weigh heavily on them throughout their lives.

Parochial House, Oranmore
for that next Driving Lesson Let this be YOUR Car

Letters to the Editor
STRONG VIEWS ON A TOUCHY SUBJECT Dear Sir, It is time that the injustices meted out to the people of Mer vue were published. While I do not begrudge the Post Office to the people of Ren more, I fail to see why they should get preference over the Mervue people, considering that we are longer in existence and we also have a bigger population. Surely the powers that be do not expect us to walk that dis tance in order to post a letter, use a phone, or send a telegram. This is 1970, and seeing that all the built up areas have their own Post Office, it is time the people here demanded their rights. "Mervue Resident" stated that all we have here is the dump. Just imagine the city refuse being dumped at our doorstep, at a time when there is so much emphasis on health and hygiene. Is it not past time that this rat infested monster was shifted from our midst. I believe that an incinerator could be purchased for much less than what it cost to turn the square into a "graveyard." Another Mervue Resident. NATIVE FLYING BOMBS IN CONSERVATION YEAR Dear Sir, One would have to be very careful those progressive days if you're the kindhearted type that likes to feed the birds, in particu lar the Starlings and Sparrows. There was never much chance on the sheds, as Crows and smaller Gulls would account for seventyfive per cent. But neither the med ium or smaller birds have much of a chance today, because the large Gulls (some as big as geese) are a hacking all before them, without their usual caution. The reason lies in the fact that much of their food comes from the waste of the old abbatoir for the past 70 years, through the main river. Many must die from star vation now, as the new building has other disposal ways which the bosses must have considered better and a sure bet more cost lier. Perhaps a quotation from Macbeth, Act I I , after the King's murder would fit nicely "What hands are Here? H a ! they pluck out mine eyes!" Sincerely, Martin J. Carr, New Road West. Dear Sir, The members of the Galway Godparents Association wish to express their appreciation of the excellent feature "Area of Need" in your issue of last week. Your timely highlighting of a social problem in Galway, of which the vast majority seem to be unaware, is most encouraging to our mem bers. Our Association was founded just over two (2) years ago. Our primary aim was to provide "God parents" for each child in both our city orphanages. At present our members number ninety (90). We need at least sixty (60) more. We had hoped to have a waiting list of Godparents rather than a waiting list of children. In a city the size of Galway (30,000 population) ours should have been an easy task, but we have not found it so. In spite of numerous appeals, seminar and meetings focussing attention on our deprived children, the public response has been very disap pointing. The role of a Godparent is a simple one. It involves taking the child home for visits, which may be weekly or fortnightly, so that he or she can spend the day in family surroundings. Holidays may be included, but only if con venient. The important thing is the regular visit. In this way the child, whose life is lived in an institution, gets an insight into life within the family circle. This is of immense assistance, when later, he has to face the world, very often entirely alone. The friendship is a powerful incentive to the child to lead a fuller life and achieve a higher potential than he otherwise would. It has been found that the children who go out regularly have shown a great improvement in their work at school and are able to mix quite freely socially with other children. If such a small effort on our part can create such a force for good, why do so many hold back? We must, here, jay a tribute to the many excellent Godparents who have been taking children out regularly. Their reward must surely be in the knowledge that a young life has been enriched and a hesitant pair of little feet set more firmly on the road. of life. Yours faithfully, Lily McDermott (Miss) "St. Mary's," Devon Park.

Danus Executive is the international look

Holiday Houses to Let
The Western Regional Tourism Organisation proposes to compile a revised list of Holiday houses, cottages, chalets and flats to let in the Region Ireland/West (Galway - Mayo). Persons offering such accommodation should send details to :

T h e Western Regional Tourism Organisation Ltd., Aras Faille, Galway.
on or before Friday, 31st July, 1970, if interested in being included in the 1971 list.

U.C.G.'s "Gaelic Background" Summer School
University College, Galway started its first Gaelic culture Summer School on July 6th. Graduate students have arrived from Britain, the U.S., France, Germany, Belgium, Sweden and Denmark--36 participants in all. The idea of the course is to pro vide the Gaelic setting for the so-called Anglo-Irish literature of Synge, Yeats, Lady Gregory, Edward Martyn and others. The lecturers are all attached to the U.C.G. staff. They include Professor M. V. Duignan, well known as the co-author (with Lord Killanin) of the Shell Guide, and Mr. T. P. O'Neill, President de Valera's biographer. The course will run for 10 days, from July 6 to July 17. Tours have been arranged to the Aran Islands, Iar Chonnacht and the Kiltartan Country. The med ieval banquet at Dunguaire Castle (with its literary entertainment) and the afternoon visit to ThoorBallylee (Yeats' castle home) promise to be the highlights of the extra-curricular activities. Besides the Anglo-Irish litera ture school, U.C.G. is host this Summer to two other courses on Comparative Education and Mod em Irish Drama. They have been jointly sponsored with the College of St. Paul, Minnesota, and the Irish American Cultural Institute. The U.C.G. Summer Schools Committee hope that these ven tures will be extended even fur ther in coming years. The Anglo-Irish literature course will be of particular in terest to Irish people. If they happen to be in Galway, it may be possible to drop in for a lec ture or two. The Summer School Director will provide details.

For Peterson and G.B.D. pipes