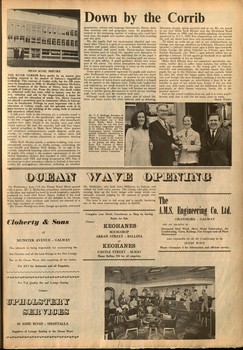 Down by the Corrib
gymnasium, science and language laboratories, library, dom estic economy unit and geography room. Its popularity is evident in the increasing number of students who enrol here each year; the pupils now number almost 450, both boarding and day girls. We, the pupils, find our environment cheerful and very much alive. There is a spirit of co-operation fostered between teachers and pupils which leads to a friendly relationship on educational and social levels. Parent-teacher meetings have become part of school life, together with discussion on the future of each pupil. The individual life of the pupil is taken very much to heart and the teaching-staff are always ready to give advice. A pupil guidance service now forms part of the school. The school atmosphere has been condusive to many past-pupils returning to carry on the tradition, both as lay-teachers and Mercy Sisters. Team spirit is promoted vigorously by pupils and teachers alike. Enthusiasm for games is shown and they are very much a part of the school curriculum. At present we are awaiting the completion of tennis Courts and pitches, which it is hoped will be opened in the Autumn term. Volley-ball, basket-ball and badminton, are much enjoyed in the gym, and this year saw the beginning of what we hope will become an annual event; a teacher games tournament in which all our teaching staff, both sisters and lay teachers took part. Although study featiifes as a major part of school life, there are many outlets for other interests such as debating, discussion groups, group projects and so on. We are proud to say that Mean ScoiJ Mhuire won the All-Ireland Road Safety Debate in 1969, and the public-speaking competition sponsored by N.U.I. 1970. Feis competitions too, are entered for, and our choirs have been very successful in recent years. Ta daltai na scoile seo go mor ar son aithbheochaint na Gaeilge mar theanga naisiunta na h-Eireann. Deanann muid iarracht i a labhairt chomh minic agus is feidir agus bunaiodh Grupa Gaeilge idir daltai Chlochar na 'Procaine agus Scoil Naomh Sheosaiinh (An "Bish"), agus priomh aidhm aca an ghaeilge a labhairt. Ta siiil againn go leanfaidh se ar aghaidh agus go meadoidh se leis na blianta. Mean Scoil Mhuire does not experience spectacular suc cesses, neither does it suffer many failures, but within its walls are moulded many of the young girls of Galway. Carefully and painstakingly, the teachers ensure that their pupils live up to the Christian ideal and are suitably fitted for after life. Amid the happy gaiety there lurks a serious aim, and though, like most teenagers, studying is not the most popular pastime amongst us, nevertheless it does fit in ad mirably as part of our school lives. Fruits of this are seen each year with exam results and the fulfillment felt by our past-pupils in their chosen vocations. Surely this is the greatest success? And so the school tradition lives on, and it is every pupil's fervent wish that it will live for many years to come. Marie Walshe

MEAN SCOIL M H U I R E T H E R I V E R C O R R I B flows gently by an austere grey building situated in the shadow of Galway's magnificent Cathedral. This convent of Gothic style, has for 130 years, since its foundation in 1840, by Mothe* Catherine McAuley, mother foundress of the Sisters of Mercy, been the inner strength of Galway city. From the sisters who dwell within its cloistered walls has come relief in famine, care for the sick, visitation and aid to the impoverished, a home for orphans and the education of youth. Yes, Mercy Convent has played a prominent part in community affairs in Galway, from its foundation. Perhaps its most important role is the education of Galway youth, and the splendid work of its sister-teachers in the teaching of the young, both at national and secondary school level. A bell peals forth in the morning air, a welcome sound to pupils congregated in the quadrangle, and a warning-note to the few stragglers arriving at the gate, who immediately quicken their pace. Pupils in the familiar navy and white school uniform file into the assembly hall and thus begins a typical schoolday in Mean Scoil Mhuire. After prayers and occasional announcements, pupils disperse, amid gay chatter, to locker-cubicles, change to indoor shoes and proceed to their various classrooms to commence morning classes. Mean Scoil Mhuire stands, a modern building, with every educational amenity, in an idyllic setting, overlooking the river Corrib and Salmon Weir Bridge. At its side is the recently completed boarding school with accommodation for 80 pupils. The school is the modern replacement of the old Mercy Secondary School, first founded in 1925, continuing in operation until 1929, and being re-opened in 1937. One of the most up-to-date secondary schools in Ireland, it has every facility for post-Btirnary education, including an excellent

On Wednesday, June 17th the 'Ocean Wave' Hotel opened with a party. Mr. J. Mullarkey, proprietor, welcomed guests at the door and opened his hotel to lavish hospitality superbly produced by head chef Ernest Deacy. Indeed if the food that evening is representative of the delights in the Ocean Wave kitchen, then residents and visitors are ensured of a very high standard of cuisine. Mr. Danno Heaslip in a short, though apt speech, welcomed

Mr. Mullarkey, who hails from Milltown, to Galway and wished the hotel every success. The Group, who play every evening, kept up the lively tempo with music which was obviously enjoyed judging by the amount of people who were dancing. The hotel is now in full swing and is rapidly becoming one of the most entertaining places in Salthill.

Complete your Hotel, Guesthouse or Shop by having

who are specialists in Structural Steel Work, Sheet Metal Fabrication, Air Conditioning, Gates, Railings, Fire Escapes and all Plant Maintenance were responsible for all Air Conditioning in the OCEAN WAVE. Phone Oranmore 4 for information and efficient service.

MUNSTER AVENUE - GALWAY
Has pleasure in being responsible for constructing the Bar Counter and all the back fittings in the New Lounge Bar at the Ocean Wave. Also supplying all the timber. Tel. 4517 for Estimates and all Enquiries