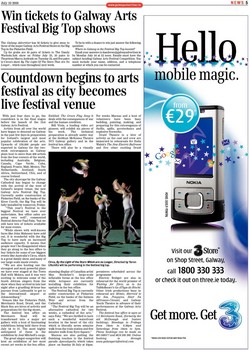 Win tickets to Galway Arts Festival Big Top shows
The Galway Advertiser has 50 tickets to give away to three of the major Galway Arts Festival Shows in the Big Top in the Fisheries Field. Up for grabs are 10 pairs of tickets to The Dandy Warhols/Ash show on Friday July 25, 10 pairs to Tinariwen/Mayra Andrade on Tuesday 22, and five pairs to Circa's show By The Light Of The Stars That Are No Longer... which runs throughout next week. To be in with a chance to win just answer the following question: Where in Galway is the Festival Big Top located? Email your answers to kandrews@galwayadvertiser.ie by Monday July 14 at 12 noon. Emails must have the subject heading Galway Arts Festival Competition. You must include your name, address, and a telephone number at which you can be contacted.

Countdown begins to arts festival as city becomes live festival venue
With just four days to go, the Entitled The Green Flag Song it For weeks Macnas and a host of countdown is in the final stages deals with the consequences of war volunteers have been busy before the launch of the 31st and the human condition. building, painting, making, and Galway Arts Festival. Bill Viola, a leading video art preparing for this extravaganza of Artists from all over the world pioneer, will exhibit six pieces of thrills, spills, pyrotechnics and have begun to descend on Galway his work. The technical explosive fireworks. in the past few days in preparation preparation is already under way Druid Theatre is a hive of for Ireland's largest and most at the Siobhan McKenna Theatre activity as the cast and crew are popular celebration of the arts. NUI Galway gallery and in the immersed in rehearsals for Enda Upwards of 150,000 people are festival box office. Walsh's The New Electric Ballroom expected in Galway for the twoThere will also be a visually and five other exciting Druid week extravaganza as Galway plays host to more than 400 artists from the four corners of the world, including Australia, Belgium, Canada, Cape Verde, Cuba, England, France, Mali, Mexico, The Netherlands, Scotland, South Africa, Switzerland, USA, and of course Ireland. The city skyscape by the Galway Cathedral has begun to change with the arrival of the west of Ireland's largest venue, the new Galway Arts Festival Big Top. Currently under construction at Fisheries Field, on the banks of the River Corrib, the Big Top will be fully installed by tomorrow, Friday. "This year's Festival is the biggest Festival we have ever undertaken. Box office sales are going very well", commented Festival director Paul Fahy, "but we still have lots of tickets available for most events. "While shows with well-known faces like John Mahoney have sold out, it is wonderful with the Big Top to have such an increased audience capacity. It means that people won't be disappointed when they go along to the box office to buy tickets for some of our biggest events like Australia's Circa, which is a great family show, and many of our large scale music events. Circa, By the Light of the Stars Which are no Longer, Directed by Yaron "We are also hosting one the Lifschitz will be performing in the festival big top. strongest and most powerful plays we have ever staged at the Town stunning display of Canadian artist premieres scheduled across the Hall with Molora, and it was very Max Streicher's large-scale programme exciting to welcome some of the inflatable forms at the box office Electric Bridget are also in South African singers from the while Artspace are currently rehearsal for the world premier of show when they arrived in late last installing their exhibition for Waiting for Elvis , as is An night after a gruelling 18-hour bus upstairs in the box office. Taibhdhearc's Go dTaga do Riocht. journey from Ladysmith to get to The Festival Big Top is currently Other Irish productions busy in the international airport at under construction at Fisheries rehearsal are Mimic , Married to Johannesburg." Field, on the banks of the Salmon the Sea , Penguins , Stair Na Venues like the Fisheries Field, Weir and across from the hEireann-Cinnail , and Galway Merchants Road, Druid, and the Cathedral. Youth Theatre in advance of their Black Box are hives of activity and "The Festival Big Top will be an performances at the Galway Arts preparations for the big shows. alternative cathedral for two Festival. The festival box office on weeks, a cathedral of the arts," The festival box office is open at Merchants Road will be says Fahy. "We are thrilled to have 1-5 Merchants Road, (formerly the transformed into a major art such a wonderful waterfront old McDonagh and Instore gallery with a host of fascinating location in the heart of the city building), Mondays to Fridays exhibitions being held there from which is literally seven minutes from 10am to 6.30pm and July 14 to 27. The most highly walk from the train station and five Saturdays from 10am to 5pm. anticipated of these is the minutes walk from Eyre Square." Phone bookings can be made on exhibition by Joni Mitchell's cargo. Macnas are also putting the 091-566577 and 0818 205 205. Online The great singer-songwriter will finishing touches to the festival booking is through host an exhibition of her most parade Apocolopolis , which takes www.galwayartsfestival.com recent art works in the box office. place on Sunday 20 July at 10pm.