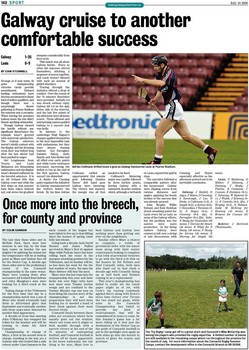 Galway cruise to another comfortable success
Galway Laois 1-26 0-9
BY CIAN O'CONNELL Strange as it may seem, 20 point championship victories rarely provide nourishment. Diehard hurling enthusiasts have become accustomed to these kind of hollow qualifiers, and though there was a surprisingly decent gathering in Pearse Stadium the outcome was a certainty. When leaving the premises Galway knew the win didn't denote anything substantial. Though Galway cleared the hurdle without any significant disturbance the triumph wasn't greeted with universal satisfaction. The Galway selectors weren't wholly content with the display and the dressing room door was bolted long after the last sliotar had been pucked in anger. Ger Loughnane, Sean Tracey, and Louis Mulqueen are demanding taskmasters and the display wasn't deemed sufficient by the forceful selectors. It is an All Ireland title that Galway crave and while the first steps on that journey have been taken without any real stress the gradient steepens considerably from here on in. This match was all about Galway bursts. Every so often the maroons stirred themselves, stitching a sequence of scores together, and Laois weren't blessed with such an arsenal of gilded attackers. Tracing through the statistics offered a drop of comfort. Over the course of the 70 minutes flourishes were provided. Initially 0-4 was struck without reply, Galway hit 1-9 on the spin either side of the interval, and the last five points of the afternoon were all home scores. Those efficient and enterprising cameos guided Galway to a success that was facile. In fairness to the underdogs Niall Rigney's charges applied themselves to the near impossible task with enthusiasm, but they were always chasing Galway. Ger Farragher, Damien Hayes, Andy Smyth, and Alan Kerins had all rifled over early points and while Laois resistance increased, narrowing the deficit to two at the end of the first quarter, Galway weren't too disturbed. A flashy Joe Canning point regained the initiative as Galway outmanoeuvred the visitors before the break. By the time Adrian

Cullinane rattled an opportunistic 31st minute goal following Damien Hayes' deft hand pass Galway were motoring. The victory was assured, the margin was all that

needed to be fixed. Cullinane's blistering major was rapidly followed by three further points, leaving Galway with a mammoth 10-point cushion which, although a tad harsh

Once more into the breech, for county and province
BY COLM GANNON The last time these sides met in McHale Park, there were four seasons in one day, by the time 2pm comes on Sunday the sun mightn't be splitting the stones but the temperature will be at boiling point as Mayo and Galway face off for the Nestor Cup. A decade ago these sides met in the preliminary round of the Connacht championship in the same venue. Mayo were coming down after successive All Ireland final defeats and John Maughan's men were looking for a third crack at the cake. Taking charge of the Tribesmen for the first time that day in a championship match was a son of Mayo who would eventually lead them to All-Ireland glory that September and eventually another title three years later, bisected by another final appearance. A decade on from that meeting John O'Mahony has swapped the tribes for the heather and will be looking to claim his third Connacht Championship in charge of Mayo, a first in his second term in charge, standing in his way are a Galway side who looked like a side reborn under Liam Sammon in the early rounds of the league but have failed to live up to that billing since the bounce of spring came fully into bloom. Going back a decade, both David Heaney and James Nallen survived in Mayo's first 15 against Sligo while Padraic Joyce has been rolling back the years in the marquee attacking position for the Tribesmen, and on Sunday will be, as has been his want for the the last number of years, the man the Mayo defence will fear the most. Mayo were the last team into the championship this year and their facile win over Sligo (who have now since seen Tommy Jordan resign and are confined to the Tommy Murphy cup one year on from being the success story of the championship) is not the preparation they will have been looking for or needed a head of their clash against their most fiercest rivals. Connacht finals between these sides are occasions where form usually goes out the window, where one team sets it alight or both muddle through with a narrow victory at the end of the 70 minutes of uninspiring football, and Connacht football is written off by those apparently in the know nationally, but one thing is for sure, Mayo love to beat Galway and Galway love nothing more than getting one over on the neighbours. Sunday offers Mayo a chance to complete a treble of provinicial titles with the minor team along with their senior counterparts looking to complete a hat trick of provincial victories to go with the third u-21 title on the bounce by Pat Holmes and Noel Connelly sides, both men who lined out in that clash a decade ago with Connelly lining up at half back and Holmes coming in as a replacement. This year's championship has failed to really set the touch paper alight as of yet, with Cork's rip roaring comeback against Kerry along with Down's extra time victory over Tyrone the two stand out game, while none in the Connacht Championship has failed to provide any kind of entertainment that will be remembered in years to come. So this Sunday's game has a lot more riding on it that just the destination of the Nestor Cup as the pride of Connacht football is put in the spotlight once again as both sides go into the breach in search of glory for county and province.

on Laois, exposed the gulf in class. The narrative followed a comparable pattern after the turnaround. Galway were clipping scores from various distances and angles, applying the brush strokes to the success that was already secured. John Brophy, Willie Hyland, and Eoin Holohan struck smashing points for Laois every bit as tasty as some of the Galway efforts, but the problem was the natives were more productive. In the dying embers Galway were content to loft over a string of late decorations with

Canning and Hayes especially effective as the afternoon petered out to its inevitable conclusion.

The `Try Rugby' camp got off to a great start and Connacht's Mike McCarthy was among the players who provided his rugby expertise. A limited number of places are still available in the remaining camps which run throughout the province for the month of July. For more information about the Connacht Rugby Summer Camps, contact the development office in the Connacht Branch at 091 561568.