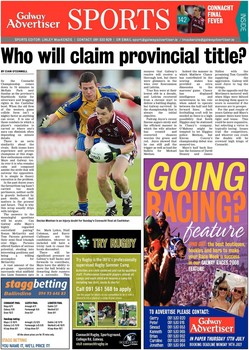 SPORTS
BY CIAN O'CONNELL So the Connacht Championship comes down to 70 minutes in McHale Park next Sunday as the province's bluebloods battle for silverware and bragging rights in the Castlebar bowl. When the old firm of the western game collide form isn't a mighty factor as anything can occur. It is one of those combats in which a player's reputation is carved or where one's aura can diminish often depending on minute details. There is an eerie similarity about the rivals. Both teams have experience and proven champions at this stage. Raw enthusiasm exists in Mayo and Galway too. As ever it is who remains calm and composed amidst the strife that will outwear the opposition. It is simple in theory execution is the problem. In the past dozen years the favouritism tag hasn't carried too much pertinence, neither outfit is gravely bothered by past deeds, all that matters is the present and future. That is why this scrap usually drips with intrigue. The answers to the meaningful questions will be acute. Can Galway stifle Mayo's highly regarded centrefield pairing? Ronan McGarrity and Tom Parsons governed their semi final triumph over Sligo. Parsons offered flashes of serious potential, stealing into interesting positions and being a willing accomplice for McGarrity. A vast amount of the pre-game speculation surrounds what midfield duo Liam Sammon opts ensures that Galway's resolve will receive a thorough test, but there were glimmers in the wins over Roscommon and Leitrim. True Ros were at their lowest ebb in a decade, and Leitrim recovered from a chronic start to deliver a battling display, but Galway survived. In the championship that is always the initial objective. Padraig Joyce's recent finesse augurs nicely and the efficient manner in which the wily attacker has created and converted chances worries the green and red. Joyce showed that he can still pull the trigger as well as load the bullets for Michael Meehan.

Who will claim provincial title?
Indeed the manner in which Matthew Clancy has contributed in the scoring stakes has provided an extra dimension to the maroons' game. Clancy has displayed intelligence and incisiveness in his role when asked to operate between the half and full forward lines. Such footballing craft will be needed as there is a high possibility that Keith Higgins may be stationed in Clancy's company. O'Mahony might be tempted to let Higgins police Meehan, but Kieran Conroy's championship debut was assured too. Mayo's half back line has the foxiness of David Heaney and James Nallen with the promising Tom Cunniffe supplying the aggression. Galway will need Joyce to tug the strings. At the opposite end the Mortimers motored well when Sligo were blitzed so denying them space to score is essential if the maroons are to prosper. For the past couple of years Galway and Mayo's summer dates have been tight and tense. This could be more expansive, but selecting a victor is typically taxing. Issues trail the competitors, and whoever can crush the doubts will be crowned high kings of Connacht.

Declan Meehan is an injury doubt for Sunday's Connacht final at Castlebar.

for. Mark Lydon, Niall Coleman, and Barry Cullinane are the candidates, whoever is included will have a tricky task to cause the locals discomfort. There will be significant pressure on Galway's half backs and forwards to contribute, Mayo have the ability to move the ball briskly so thwarting their runners is a necessity. This

All the above prices are for 70 mins only.

STAGG BETTING YOU NAME IT, WE'LL PRICE IT!