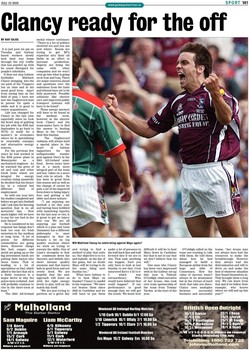 Clancy ready for the off
BY RAY SILKE It is just past six pm on Tuesday and Galway based workers slowly inch their way home through the city traffic that has snarled up with its usual disregard for people's schedules. It does not stop Galway footballer Matthew Clancy swinging into the car park of the Trappers Inn on time and in his usual good form. Apart from seeing him on the field of play, I have not met the Oughterard man in person for quite a while and it is good to renew acquaintance. Life has changed for Clancy in the last year especially since he took the brave step of quitting his job with the ESB last September to go back to NUIG to study for a master's in economics where he is specialising in renewable energies and alternative energy sources. For the previous few years he had worked at the ESB power plant in Moneypoint as a mechanical engineer. As he watched the price of oil and coal and other fossil fuels which are integral for energy creation rising massively he decided that his future lay in a related but different field of employment. So with one year into his studies completed and before we get into football talk I ask him the burning question that is on all motorists' lips - How much higher will we have to pay for our fuel in the near future? He is considered in his response but things don't look too rosy for Irish motorists in the medium or long term. "A lot of prices for different commodities are going down. However things like fuel, copper, and metal are going up so the big investment funds are putting their money into those items. That is leading to a lot of speculation on fuel, which allied to the fact that oil is a finite resource is a major factor in why the prices have rocketed. And will probably continue to rise in the short-term at least." The 2001 All-Ireland medal winner continues: "There is a lot of politics involved too and you see now where Russia are trying to get BP's expertise into their oil fields in an effort to increase production, Nigeria are doing the same with other companies and we won't even go into what is going on in Iran and Iraq. There are major concerns ahead and questions over the emissions from bio fuels and ethenol have yet to be fully answered. Possible solutions like electric cars and improved public transport systems will have to be found". Those energy answers will have to be found in the medium term, however in the shorter term Clancy and his team-mates have to find the answer to beating Mayo in the Connacht final this Sunday. The Oughterard clubman will always hold a special place in the heart of Galway supporters for his indispensable wonder goal against Derry in the 2001 All-Ireland semifinal. Seven years later he is a much more integral part of the team and has taken on a more lead role in attack. He has been in great form this season and as well as the change of career he puts a lot of his improved form down to being injury free and getting a bit older and more mature. "I am enjoying my football a lot this year and having been hobbled with hamstring injuries for the last year or two, it is great to get an injury free run. We are all enjoying our football which is a plus and Liam {Sammon} has a different philosophy to most managers in that he focuses a lot on top quality sessions where we work on trying to execute the skills. One of Liam's strengths is that he condenses down his theories and beliefs into short intense quality sessions and that leaves lads in good form and not overly tired. We are hopeful that the new approach will leave us with the right energy levels to play well on the match day itself. "We are just trying to perform on a given day

Will Matthew Clancy be celebrating against Mayo again?

and trying to find a method of play that suits us. Our objective is to try and explode on the day of the game, but no doubt Mayo will be trying to do the same thing next Sunday too." What have Galway to do to beat Mayo on Sunday? Clancy is candid in his response. "We have not beaten them since 2002 in Castlebar and we will have to put them

under a lot of pressure in the half-back line and half forward line if we are to win. That said, anything can happen. Sure you only have to look at last Sunday to see that. Cork outscored Kerry 1-13 to 03 which was extraordinary. Who would have believed that could happen? If our performance is good enough then we will get the result. We know how

difficult it will be to beat Mayo down in Castlebar but that is not to say that we don't believe that we will." One man who Clancy has been very impressed with in the Galway set-up this year is Padraic O'Ceidigh, chief executive of Aer Arann, who took over team sponsorship of the team from Tommy Varden at the start of the year.

O'Ceidigh called on the team one evening to talk with them. He told them about how he had managed to build a European airline from the bogs and hills of Connemara. How the value of success wasn't always in its attainment but in the virtues of hard work that take you there. Clancy sees analogies between successful business and successful

teams. "Aer Arann may not always have had the resources to make the breakthrough. However they always had the determination and will to drive on and make the best of whatever situation they found themselves in. That brought them a long way. We can learn from that and if we follow their example, who knows where we will end up this year?"