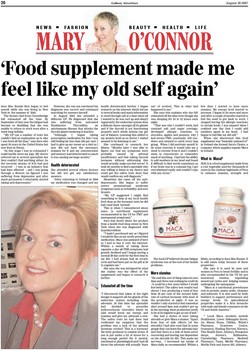 MARY
Sara Mac Kenzie first began to feel unwell while she was living in New York in the summer of 2001. The former chef from Clarenbridge felt exhausted all the time. By September of that year the fatigue had become so disabling that she was unable to return to work even after a week long holiday. "My GP ran a number of tests but couldn't find an explanation as to why I was tired all the time," says Sara who spent 16 years in the United States but now lives in Navan. "At this stage I was so exhausted I could hardly move my legs. My doctor referred me to several specialists but they couldn't find anything either. As the terrorist attacks of 9/11 had just occurred - I was in an industry that had been affected - and I was going through a divorce, he figured I was suffering from depression and after much persuasion I reluctantly started taking anti-depressants." However, she was not convinced his diagnosis was correct and continued searching for answers herself. In August 2003 she attended a different GP. He diagnosed that she was suffering from untreated Hashimotos Thyroiditis, an autoimmune disease that attacks the thyroid gland rendering it inactive. "Although I began taking prescription medication for this I was still feeling far less than 100 per cent. I had to give up my career as a chef as I now did not have the necessary stamina for it and my concentration and memory had deteriorated so much it was causing me huge anxiety."

O'CONNOR
health deteriorated further. I began research on the internet which led me to several books and much information to weed through (all at a time when all I wanted to do was curl up and sleep!) Apparently the endocrine system does a delicate dance amongst all its glands and if the thyroid is not functioning properly one's whole system can get out of balance. Learning this added to my anxiety level as no doctor I visited seemed to be listening to me." She continued to research her illness. "Months later I was able to figure out that my symptoms were probably caused by adrenal insufficiency and that taking thyroid hormone without addressing this would actually make one feel worse! It took six months to find a specialist who was willing to listen to my theory and could get the saliva tests done that would confirm my self-diagnosis." Meantime she came off the antidepressants. She began to suffer severe premenstrual syndrome symptoms such as irritability and sore breasts. "My GP suggested I might find something to help at my local health food shop as the hormone tests he did had come back `normal'. This is when I remembered about maca [a nutritional supplement recommended in the US for PMT and menopausal symptoms]." Sara had heard about the product from a health food shop owner in New York when she was diagnosed with hypothyroidism. "I hadn't purchased any as I figured I would be fine on my newly prescribed medication. Maca was unheard of here so I had to buy it over the internet. Within a month of taking three capsules a day all PMS symptoms had greatly declined and I began having a normal 28-day cycle for the first time in my life. I had always had an erratic cycle and had been put on the pill at 16 to regulate me." She says she was intrigued by what she claims was the effect of the supplement and began to research it further. out' of cortisol. This is what had happened to me." She says this explains why she felt exhausted all the time even though she was sleeping for 10 to 12 hours each night. "That was why I couldn't work, had constant salt and sugar cravings, developed allergic reactions to avocados, apples and peanuts, why I had severe PMS, constantly felt rundown and seemed to catch every bug going. When I did motivate myself to do some exercise it would take me a week to recover from it and I couldn't seem to concentrate or remember much of anything. I had lost the ability to add numbers in my head and found it difficult to find words sometimes as if my brain was in a constant fog. I got overwhelmed easily and couldn't cope with any stress." few days I started to have more stamina. My energy level started to increase. I began to do more and more and after a couple of months started to feel the need to get back to work. I stopped having the allergic reactions to certain foods. I was amazed when I realized one day that I could add numbers again in my head. I had begun to feel like my old self." When she discovered this food supplement was "basically unheard of" in Ireland she formed Sara's Choice, a company which supplies organic Maca in Ireland.

`Food supplement made me feel like my old self again'

What is Maca?
MACA is a food supplement made from a root vegetable used for thousands of years in the Andean highlands of Peru to enhance stamina, strength and

Health deteriorated
She attended several others doctors but did not get any satisfactory answers. "After returning to Ireland in 2004 my medication was changed and my

Her local GP believed chronic fatigue syndrome was at the root of her health problems.

More stamina
"He said this sort of thing takes its own time and there was nothing he could do - it could be a few years before I would feel better! The saliva test results had shown I was producing a total of less than 20 per cent of the normal daily rate of cortisol hormone with most of the production at night. It was no wonder I only started to feel somewhat alert around 9pm and couldn't get up in the morning when production needs to be at its highest to get us out of bed." She had a choice of start taking steroids or give Maca a chance. "Apart from fear of side effects [of the steroids] I had also read that in some people they can leave the adrenals lazy and that there is a risk of them never recovering and leaving one dependant on the steroids for life. This made me nervous. I increased my intake of Maca daily as recommended. Within a

Exhausted all the time
"I discovered that taken at the right dosage it supports all the glands of the endocrine system including weak adrenals. At this time the specialist had decided to prescribe hydrocortisone (steroids) which he said would boost my energy and stamina and give my adrenals a rest. The saliva tests he had done had confirmed my suspicion that the problem was a lack of the adrenal hormone cortisol. This is a hormone the body produces to combat stress. If one is put under a lot of stress for a long enough period (be it mental, emotional or physiological and I had all three) the adrenals will actually `burn

libido, according to Sara Mac Kenzie. It is still eaten today because of these properties. She says it is used by men and women in Peru to boost fertility and is also recommended in the US for pre menstrual tension, regulating menstrual cycles and helping women undergoing the menopause. "Maca is a nutritional powerhouse rich in protein, amino acids, vitamins and minerals. It is also used by body builders to support performance and energy levels. Its aphrodisiacal properties make it a firm favourite with male and female consumers in the US and South America." * Local Maca stockists include Healthwise, Lower Abbeygate Street, An Bhean Feasa, Clifden, Walsh's Pharmacy, Orantown Centre, Oranmore, Healing Harvest, Kinvara, Vita Health Store, Athenry, Evergreen shops, Jorena's, Ballinasloe, Clarinbridge Pharmacy, Medwell Pharmacy, Tuam, Merlin Pharmacy, Merlin Park and Joyces 365, Athenry.